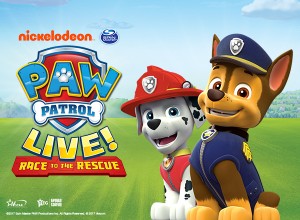 An exclusive venue pre-sale will take place from 9am on Wednesday 12 April. Customers wishing to obtain priority tickets will need to sign up to the Motorpoint Arena Nottingham Mailing List by 23:59 on Tuesday 11 April -https://www.motorpointarenanottingham.com/online/createAccount.asp A pre-sale email will be sent to new Mailing List subscribers before 9am on Wednesday 12 April.

Current Mailing List subscribers will receive the pre-sale email today (10.04.17) and are asked to check their junk/spam folders if they cannot find the email.

Tickets can be booked online at https://www.motorpointarenanottingham.com/online/paw-patrol via 0843 373 3000 or in person at the Motorpoint Arena Box Office, Bolero Square, The Lace Market, Nottingham, NG1 1LA.

PAW Patrol Live! “Race to the Rescue” shows that “No job is too big, no pup is too small!” and shares lessons for all ages about community, social skills and problem solving as the characters each use their unique skills and teamwork. When Mayor Goodway goes missing during the day of the Great Adventure Bay Race, the pups come to the rescue. Families can join Ryder, Chase, Marshall, Rocky, Rubble, Zuma, Skye and Everest for the show’s first tour in UK and Ireland. Running at 80 minutes, PAW Patrol Live! “Race to the Rescue” includes two acts and an intermission. The show is set to engage audiences with Bunraku puppetry, an innovative costuming approach that brings the PAW Patrol characters to life on stage with their vehicles and packs.

“Using Bunraku, puppetry elements are built into costumes worn by real actors to create a wonderful combination of life-size pups and to make a stronger connection with the audience. The PAW Patrol cast sings and dances, which brings a fun, realistic parallel between the animated series and the live show,” says Jim Waters, producer, VStar Entertainment Group.

The performance features music, dance and an original script as well as classic theatrical scenery along with a high-tech video wall that visually transports families PAW Patrol locations such as Adventure Bay, The Lookout, Seal Island, Farmer Yumi’s farm and Jake’s Mountain. Special interactive video allows the audience to participate in the show via interviews, solving puzzles with the Pups, following Mayor Goodway and much more.

PAW Patrol Live! “Race to the Rescue” is presented by Life Like Touring, VStar Entertainment Group and Nickelodeon. PAW Patrol airs every day on Nick Jr.

Arrange transport to this event through the Motorpoint Arena Nottingham when you purchase tickets. Book a £2 discounted return travel to this event on NCT buses or NET trams. Click herefor more information.