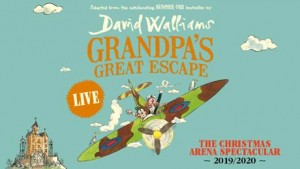 Actor and comedian Nigel Planer will star as Grandpa in the first ever stage adaptation of Grandpa’s Great Escape, the exhilarating number one best-selling children’s book by David Walliams which will tour UK arenas this Christmas.

The tour will be arriving at Motorpoint Arena Nottingham on 30 December 2019, with tickets for the three back-to-back performances on sale now.

Best known for playing Neil in the much loved BBC2 cult comedy The Young Ones, Nigel has worked extensively in TV, film and radio throughout his illustrious 40-year career. He is also certainly no stranger to the stage, with theatre credits including Charlie and the Chocolate Factory, Hairspray, Chicago, Wicked and We Will Rock You.

Nigel Planer said: “It’s a great honour to be asked to play Grandpa in the live version of this amazing and cockle-warming story by David Walliams. It’s set to be such an amazing spectacular and I can’t wait to drive a tank and fly a life-size Spitfire over audiences around the country!”

The live version of the kids’ favourite, which has sold over two million copies around the world launched with two performances in Nottingham on 30 December 2019 and due to demand, has just put on sale a third performance happening at 13.00hrs.

Grandpa’s Great Escape Live follows the acclaimed television film which aired on BBC One in December 2018, and will be directed by double Olivier Award winner and Tony® Award nominee Sean Foley (The Catherine Tate Show Live & The Painkiller). Grandpa’s Great Escape is the eighth book by Walliams and was published in September 2015 by HarperCollins Children’s Books.

The wonderous stage design for Grandpa’s Great Escape Live will see arenas around the UK transformed into London and its landmarks, including Buckingham Palace and the River Thames, from thousands of feet in the sky, as Grandpa’s life size Spitfire soars through the air. The set for this multi-million pound production has been created by Stufish Entertainment Architects (Cirque du Soleil, Beyonce & Jay Z, Madonna, The Rolling Stones). The script adaptation of the book has been written by Kevin Cecil (Little Britain & Gangsta Granny television film).  Casting for the show will be announced soon.

Grandpa’s Great Escape, which has been translated into 39 languages received a wealth of glowing reviews with the Evening Standard declaring Walliams as “the new Roald Dahl”, while The Times describe the story as “a beguilingly funny, original and thought-provoking tale… hilarious”.

Many years ago, Grandpa was a World War II flying ace. But when he is sent to old folk’s home Twilight Towers – run by sinister Matron Swine – it’s up to Grandpa and his grandson, Jack, to plot a daring escape. Little do they know, the wicked matron is on to them.

Tickets are on sale now, with prices starting from £40.40. All prices listed include admin and facility fee.

Tickets can be purchased online at
https://www.motorpointarenanottingham.com/Online/ or via 0843 373 3000 or in person at the Motorpoint Arena Box Office, Bolero Square, The Lace Market, Nottingham, NG1 1LA.