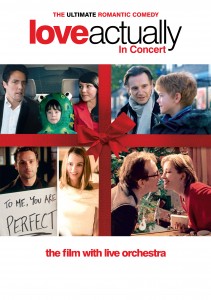 Following a sold out 2017 tour, Love Actually will once again be screened live across the UK with a full orchestra performing its enchanting score – just in time for Christmas!

Kicking off the holiday season and getting many into the holiday spirit, the tour will begin in Nottingham on 26th November, before travelling onto an array of cities up and down the country, including Theatre Royal Drury Lane in London.

After the hugely successful sold out first run in 2017, the Liverpool Echo commented that the orchestra had given the film “a new lease of life” as “audiences laughed, sang, and even cried as the live band helped bring the film to life”.

Directed by Richard Curtis and originally released in cinemas in 2003, Love Actually tells ten separate yet interweaving stories of love around Christmas time.

A full, live orchestra will perform Craig Armstrong’s evocative score at these shows, with the film being projected onto a huge screen. Armstrong is one of the UK’s most recognised film composers, with his work being awarded a BAFTA for his Achievement in Film Music.

With the film becoming a Christmas tradition for many, audiences attending the Love Actually Live Concert Tour will be treated to a unique way to watch the film that has gotten so many into the holiday spirit for the last 15 years.