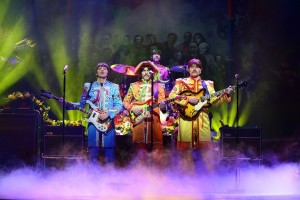 Let It Be: A Celebration Of The Music Of The Beatles returns to the UK for a national tour starting in Summer 2018.  The show is set to visit the Royal Concert Hall Nottingham for a week-long run fromTuesday 11 to Saturday 15 September.

Today, the talented cast who will portray the Fab Four in the show have been revealed – coinciding with the 48th anniversary of Let It Be the album, which was released on 8 May 1970.

Let It Be is the 12th and final studio album released by The Beatles – almost a month after the band split and went their separate ways. The album release also came shortly before the film of the same title opened in cinemas.

And now, Let It Be: A Celebration Of The Music Of The Beatles returns to the UK with a brand new second half of the popular show – giving audiences a rare glimpse of how the band may have continued as a four-piece. Fans will see The Beatles reunite for one night only, with the new section of the show set a decade after the group went their separate ways.

A cast of talented musicians will take to stages across the country as the Fab Four, wowing audiences with their effortless and indistinguishable portrayal as John, Paul, George and Ringo. The performers have already toured the show to some of the biggest stages in the world including Broadway.

The cast are revealed as Michael Gagliano who will play John Lennon; Emanuele Angeletti asPaul McCartney; John Brosnan as George Harrison; and Ben Cullingworth as Ringo Starr. The band will be joined on stage throughout the tour by musical director Michael Bramwell on keyboards.

Producer Jeff Parry comments: “I grew up listening to The Beatles, they sparked a passion for music which, for me personally, has gone on to become so much more – a career, and a way of life. Their talent, hunger, and incredible ambition inspired me to follow my dreams too. The Beatles were so much more than a group. And it’s unbelievable to think that Let It Be was released 48 years ago, it still sounds as current as it did back in 1970.

“Our strong cast of Michael, Emanuele, John and Ben, along with musical director Michael are going to give audiences a show they have never experienced before – The Beatles’ concert that never was. Developing the show with the new Part II has been a complete labour of love and I am so excited to now introduce this brand new element to UK fans.”

Let It Be has firmly established itself as a successful West End and international touring show. And now the smash-hit stage show has been updated and is back on tour, featuring a brand new Let It Be Part II – which has never been seen before in the UK.

The show is a celebration of the phenomenal music of The Beatles, and has already been seen by more than two million people worldwide, including an acclaimed run in the West End and two UK tours.

Let It Be is the ultimate experience for Beatles fans, and features many of the Fab Four’s best loved songs including A Hard Days Night, Day Tripper, Sgt. Pepper’s Lonely Hearts Club Band, Twist and Shout, I Want To Hold Your Hand and Strawberry Fields Forever.

The team behind international hit stage show Let It Be, have come together once again to create a very special show for fans by incorporating a brand new Let It Be Part II into the show.

The updated Let It Be production will be premiered in the UK when it opens at Cardiff’s Wales Millennium Centre on 20 August 2018. The show will then embark on a UK, European and international tour taking countries including Germany and North America.

Beatles fans are invited to join John, Paul, George and Ringo for a great night of live music. Enjoy the early beginnings at the word famous Cavern Club, through to the height of Beatlemania.

In a twist from the original Let It Be show, audiences will then be taken on a Magical Mystery Tour to experience the concert that never was. Part II of Let It Be is the brand new part of the show, giving audiences the rare opportunity to see The Beatles reunite for one night only, set a decade after the group went their separate ways.

After opening in Cardiff, the updated Let It Be show will then visit Cheltenham, Liverpool, Nottingham, Dublin, Hull, Edinburgh, Dartford, and Manchester.

WHAT THE CRITICS SAY ABOUT LET IT BE

‘The Beatles are back sending theatre audiences dancing into the aisles’

‘Winning over an Empire full of Liverpudlians (including John Lennon’s sister Julia) is no mean feat. But one that Let It Be happily achieves’

‘Fab for all the family’

The Times of London

‘Does everything and more to recreate that magic era’

LET IT BE: LOCAL LISTINGS INFORMATION:

ANNOUNCED: JOE MCFADDEN TO STAR IN A BRAND-NEW PRODUCTION OF THE CULT CLASSIC PRISCILLA, QUEEN OF THE DESERT