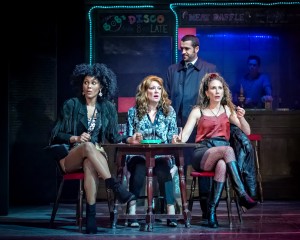 Band of Gold was the ground-breaking crime drama that captivated over 15 million viewers each week when it aired on ITV. Starring(amongst others) Geraldine James, Cathy Tyson, Barbara Dickson and Samantha Morton, the ground-breaking crime drama captivated the nation, with bookmakers taking bets on the identity of the killer before the final episode!

This new, murderous but at times heart-warming and humorous stage adaptation, tells the story of a group of women – Carol, Rose, Anita and a young mother, Gina – as they battle to survive whilst working in a notorious red-light district with a killer on the loose. When one of their colleagues is murdered, they need to find the killer before they strike again. Band of Gold on stage will feature a star-studded cast including Gaynor Faye, (Emmerdale, Playing the Field, Calendar Girls), Laurie Brett, (EastEnders, Waterloo Road, Les Miserables), Kieron Richardson, (Hollyoaks, Heatbeat), Shayne Ward, (Coronation Street, Rock Of Ages, X Factor Winner), Sacha Parkinson (Mr Selfridge, The Mill) and Andrew Dunn (Dinnerladies, The Full Monty).

Following the unprecedented sell-out success of Fat Friends The Musical, producer Josh Andrews and Kay Mellor have teamed up again for Band of Gold, to be directed by Mellor, with set design by Janet Bird, costume by Yvonne Milnes, lighting by Jason Taylor, sound by Mic Pool and music by Hal Lindes.