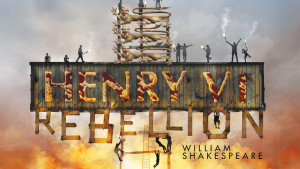 Sunday 5 December from 10am

The first half of the play is made up of a series of group scenes each featuring a different group of eight to twelve characters representing the people of England. The second half includes a large pageant in which the people rise up in revolt as part of the infamous Jake Cade Rebellion.

The RSC is looking for these scenes to include groups of adults drawn from communities from six of the RSC’s partner theatres (including Nottingham) involved in its Shakespeare Nation adult participation initiative. Twelve participants from each of the six areas will appear alongside a cast of 26 professional actors in Stratford at selected performances in April and May 2022.

No previous acting or performance experience is required, and people from all backgrounds are welcomed.  The only stipulation is that participants must be aged 18 and over. The aim is to find a wide and diverse group of people that can truly reflect and represent Nottingham on stage with the RSC in Stratford.

David Longford, Creative Learning Manager for the Theatre Royal & Royal Concert Hall Nottingham, said: “This is a really unique opportunity for people who wouldn’t normally think theatre is for them.  We’re not looking for experienced actors, we’re looking for anyone who is keen to meet new people and try something a bit different.  Everybody is welcome to come along, from any age or background, just to find out what’s it’s all about and to have a go.  You never know, you might discover a whole new side to yourself!”

Rehearsals will take place in the Nottingham area, working with RSC Assistant Directors and practitioners, with support from the Theatre Royal.  The Nottingham participants will then rehearse and perform in Stratford for their selected performances from April onwards.

Recruitment for the Nottingham participants will take place on Sunday 5 December from 10am at Take 1 Studios in Hyson Green.  Those interested in coming along should register their interest by emailing David Longford, Theatre Royal Creative Learning Manager at david.longford@nottinghamcity.gov.uk or by phone on 0115 989 5531.

Henry VI: Rebellion hurtles through one of the most turbulent periods in English history, asking the question: can the people ever really decide their own future?  The production will also feature young performers who are part of RSC Next Generation Act, a unique talent development programme made up of young people aged between 13 and 18 from the RSC’s nationwide network of 222 Associate Schools. The production runs in the Royal Shakespeare Theatre, Stratford-upon-Avon between 1 April – 28 May 2022.