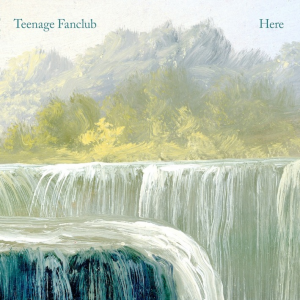 TEENAGE FANCLUB have returned with Here, their first album in six years. As the band get ready to tour to promote the album, GAV SQUIRES talks to the band’s Normal Blake.

G: New album Here comes out prior to the tour starting, how did the sessions go? It sounded quite eclectic, moving from Provence to Glasgow to Hamburg

NB: We always like to work in a new environment when we’re making an album. It’s always inspiring. We recorded the initial backing tracks at Studio Vega in Provence. They have a lovely old vintage EMI desk, which we were keen to use. It had come from Paris and was purportedly used by the Rolling Stones in the early 70’s. Vocals and remaining overdubs were done in Glasgow at Raymond’s studio about eight months later. After another short break we relocated to Hamburg to mix at yet another amazing studio, Clouds Hill Recording.

G: It’s been 6 years since your last album Shadows was released, what can we expect from the new Teenage Fanclub LP? Judging by lead single I’m In Love, I’m assuming that there’s not been a sudden change of direction into Norwegian Death Metal?

NB: The band has a pretty fixed set up. Three songwriters, contributing an equal number of songs, with each of us playing on the others compositions. If one of us went off on a tangent stylistically, the album would become unbalanced. The most important thing about the Teenage Fanclub sound is the dynamic between us as individuals. If you change that, it’s no longer us. Of course if someone wants to make a Norwegian Death Metal album, they are free to do so, outwith the band. We have all worked on other projects. I made an album last year with Jad Fair from Half Japanese and the Japanese band Tenniscoats, which was entirely improvised.

G: You mention other project there and since Shadows, everyone has been busy with other thins – Jonny, Electric Cables and Snowgoose. How did you know that it was time to reconvene as Teenage Fanclub?

NB: We only make albums when everyone feels like they have something to contribute. If someone’s not feeling it or doesn’t think that they have enough to offer in way of songs, we won’t record. At some point, around four years ago, we met up after a show and the decision was made to start work on this record.

G: What can we expect from the tour? Will many of the new songs get an airing? With such a brilliant back catalogue, how do you go about putting together a set list?

NB: We always enjoy playing new songs. The band has never gone away in the sense that we’ve never broken up, so the new album is always the most important thing for us. We’ll normally play for around an hour and a half and will include about six or seven new songs in the set. The rest (around fifteen) will be from the back catalogue.

G: You played Nottingham a few times before, do you ever have chance to see much of the place? Have you picked up any of the lingo? “Ayup miduk” or “Grummin thenn”?

NB: I’ll maybe try those out after the show if we go for a pint in a local hostelry

G: Your gig has been moved from The Rescue Rooms to the larger Rock City, a venue that you’ve played a number of times before. Is it somewhere that you enjoy playing? Do you have any favourite memories about previous gigs there?

NB: Nice to be back there and great that we’ve been able to sell enough tickets for the show to be moved. You never quite know how you’re going to be received after such a long time away.
G: You’ve released some amazing albums, a series of perfect indie-pop singles, Liam Gallagher modestly described you as the “second best band in Britain” and Kurt Cobain was a massive fan. What would you say has been the highlight of the last 27 years together?

NB: There have been many highlights. We’ve gotten to work and play with some amazing bands over the years. We were the opening band on Nirvana’s Nevermind tour and it was incredible to witness that phenomenon. We toured with Radiohead in the US on the OK Computer tour. Great guys and a thrill to see them perform at the height of their powers. They’re still making great records. Those two will live long in the memory.

G: And finally, will this be the album and tour that unlocks the crucial under 20s demographic? Surely it’s time that we have a teenage Teenage Fanclub fanclub?

NB: This is going to sound like a total cliché but, yes, we have noticed that there are more people in their twenties and under coming to see the band. Maybe their parents had the early albums and they have some connection with the band because of that?

Interview: “Bring out…Christmas jumpers and have a big party, Nottingham”