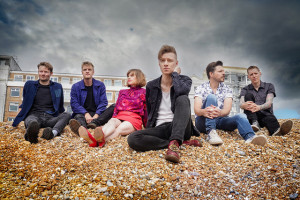 Celebrating all the best things life has to offer – SKINNY LISTER – return with a jubilant new single this Autumn.
WATCH VIDEO HERE || LISTEN HERE
‘A Matter Of Life & Love’ is the title-track of their fifth studio album (out 22nd October 2021 on Xtra Mile Recordings) and one of its finest, catchiest, and most uplifting moments.
Nodding to the works of Madness or The Specials at their ska/pop peaks, Skinny Lister’s new single ‘A Matter Of Life & Love’ pays loving homage to that classic sound with its cheerful bar-room pianos, walking basslines and woozy saxophones in abundance.
Sung by the band’s Dan Heptinstall, it’s a track that encourages us to look on the bright-side of life and treasure the trivial; a recurrent theme throughout their upcoming album. As Dan explains:
‘A Matter Of Life & Love’ is us capturing a collection of very true stories and feelings, that have really ‘mattered’ to us over the past year or so. And the title track is a reminder to recognise the moments in life that really matter, but that can sometimes seem ‘trivial’ or ‘throwaway’ – a sentiment likely borne out of those months of enforced limited social contact last year.”
Paired with a humorous official video filmed on Hastings beach that quite literally sees the Skinnies jumping for joy, you can check it out here and now: https://youtu.be/YDUe-e8GoAg
‘A Matter Of Life & Love’ swiftly follows: ‘Damn The Amsterdam’, a sea shanty which featured guest harmonies from: The Longest Johns (who will also be joining them for their Winter UK tour – details below).
Both tracks will feature on ‘A Matter Of Life & Love’, a new Skinny Lister album written over the past 18 months and the first to be entirely written, produced, recorded and mixed by the band themselves. Bringing together all their influences and styles, from ska to rock and from folk-punk to traditional shanty, throughout its 12 tracks ‘A Matter Of Life & Love’ is in many ways the distillation of everything that has seen the world fall for Skinny Lister’s charms. An album about camaraderie and companionship through thick and thin, to cherishing the simple things freedom brings; ‘A Matter Of Life & Love’ finds a band brimming with a zest for life, love, music and good-times. It’s released everywhere on 22 October, via Xtra Mile Recordings (pre-order).
In support of the album, Skinny Lister will be hitting the road for a UK headline tour throughout November and December, with Manchester and London shows already sold out. The band will also be supporting Less Than Jake and embarking on a headline German tour in the new year.