Last Thursday, The RX BANDITS came to the Basement at Rock City for their Resignation Anniversary tour.  They were supported by the local Notts ska band GONE AND LOST IT, who were amazing but sadly only had a handful of people turn out as they were on quite early.  Still they gave it their all and have a great punk ska sound that is ridiculously catchy.  Highlight of their show must have been when, in the tiny audience, a blind man started skanking! 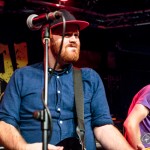 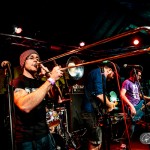 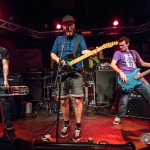 Next up were Austrian band ASTPAI, who are supporting the RX Bandits throughout most of their tour.  They had more of a teeny boppy early naughties indy rock sound that didn’t seem to follow on from Gone and Lost it, or be a very good warm up for the RX Bandits.  They were good at what they did but their sound didn’t fit the night. They didn’t really engage with the audience either, which by this point had grown considerably and included a couple of members of the Bandits who came out to watch for a bit. 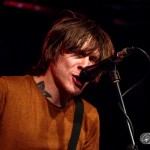 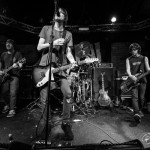 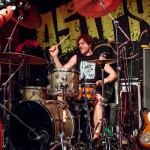 By the end of Astpai, the basement had filled up and the buzz was verging on electric as the anticipation for the main act built.  They came on late, but to a rapturous applause and opened with Sell You Beautiful, which should have instantly got the entire crowd going, but sadly Nottingham was a bit dead that night.  However the energy RX Bandits filled the stage with totally made up for it and eventually got some people really going!  After they played the entire Resignation album they threw in a couple of tracks from other albums and a couple of new ones which sounded great, a good indicator for their new album which they are currently recording. 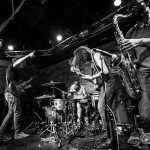 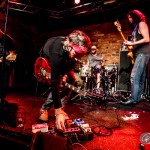 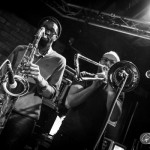 At the end of the show, they hung around in front of the stage meeting their fans which was lovely to see just how much they appreciate their support. Check out Pledge Music to see how incredible their fans have been in raising money to fund the new album; there is also a new track available for pledgers on their called Ready Eddie.

Prior to the show, and amidsts a heated ping pong tournament, I spoke to the RX Bandits frontman Matt Embree backstage at Rock City. 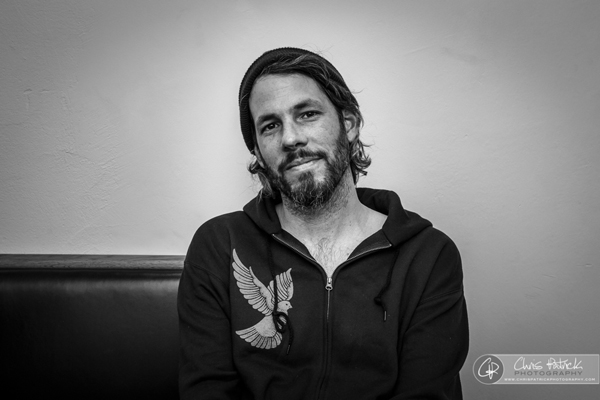 So this is the anniversary tour of the Resignation album, how are you finding it so far?

Well we have only done one show, yesterday, and it was really fun.  There were a lot of people there it was almost sold out. It was great, it was cool.  A little jet lagged still, but overall it’s really cool to see, I’ve been meeting a lot of people that came to our shows ten years ago and are here now and I think that’s great.  Especially being a band that have never made a push to be on radio or anything like that, we purposefully took a different  route instead of, you know, changing our sound and trying making something that would be more agreeable with a mainstream approach and so to have people in another country coming to our shows consistently for ten years, I met multiple people who have seen us every single time we have toured in Europe and we have toured in Europe 11 times and met people who have seen us 11 times.  It’s incredibly humbling and also gratifying.

I remember listening to the Resignation album as a teenager, do you think your sound has evolved over the last ten years?

Yeah our sound changes every record just because we are human beings and instead of trying to stick to a certain sound, I mean that’s kind of the benefit of not trying to fit into a mainstream approach is that you can make whatever sound makes you happy and wherever you are at in your life, you know, you were saying 10 years ago as a teenager, obviously what you were doing then would have been a lot different to the kind of things you want to do now in your life, which is the same as me.  Ten years ago I wasn’t a teenager but I was barely in my 20’s, you know, we wrote the Resignation album when I was 21 so it’s nice to be proud of things you did back then but you know it’s also really valuable to make sure that you continue to progress and move on.  So for every record we make it a point to make it sound different and I know it’s been detrimental as far as certain aspects of keeping fans as some people really love a certain sound on a certain record but you know I look at bands like the Beatles, not saying we are anything near the Beatles or whatever, but I look at bands like the Beatles and people expected it to sound different.  Like you look at their early records and you look at Rubber Sole, Revolver,  Sargent Pepper to Abbey Road, I mean there is White Album in the middle obviously, they are all so different but it still sounds like the Beatles.

So you are making a new album at the moment?

And you are releasing it on your own label? 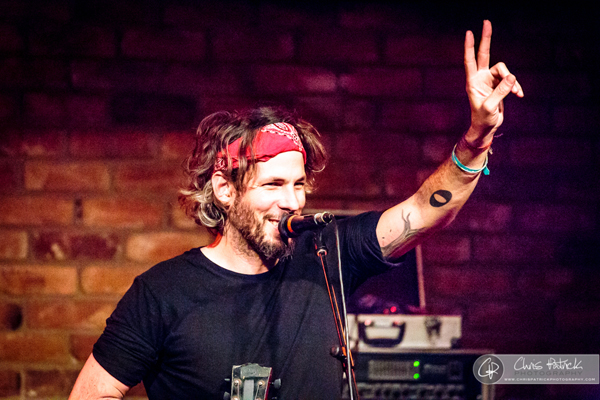 I’ve seen that you are using Pledge Music to fund it, were you surprised with the fans response, I noticed that you got 75% of your target in a couple of days?

Yeah and now we are at 98% today.  That has literally just been a shocking situation.  I figured it would be good as the fans that we have are incredible and are music lovers and they understand what we are going for and the compromises you have to make if you sign to a label, even if it’s a indylabel and they understand that and I think that most of them would prefer us not to make any compromises.  We would prefer not to make any compromises, just like most people in life, although you have to make compromises in every relationship in your life. I have to be careful not to go on to many tangents here but yeah super surprised that it just happened so fast, I figured it would happen in a couple of weeks, 3 weeks whatever, but three days? That’s really quick, so proud, all I can do is remain really thankful and humble to be supported by people like that because the truth is that, Pledge, that program allows the fans of our band to literally contribute directly, because instead of the normal model of you put out a record and people buy it afterwards and then the money goes to the label and the label takes their percentage out and the distributor takes their percentage out and then they give you a percentage of that after is all said and done.  Now this way the distributor takes their percentage out and that’s it, so the money just goes directly to the band instead of going through any other channels, and you know when I support bands that I love I would much rather know that the money is going to them.  It is  a great way to interact with the fans but I was a bit worried, well not worried but apprehensive at first because I’m not the greatest on camera personality, I just feel really weird, am just too worried about how I’m going to act as I mumble a lot.

Through Pledge Music you are donating to Doctors without Borders, was there any particular reason that you chose that organisation?

Well it’s an organisation that I personally have donated to for years and our base player Joe.  They are just an organisation that I believe in, having spoken to the representatives from their organisation and the way they are transparent with their money.  A lot of charities, I’m not saying that they’re not good, that they don’t do good, but a lot of charities are just not very transparent with how the money works and I had a really bad experience; I have a little record label back home, we are called MDB, its basically just a group of my friends back home and we make different styles of music and we put out records that we like, I’ve never made any money from it, I’ve actually only just lost money, not too much otherwise I probably wouldn’t do it, but it’s not about that it’s just about music that I love and we do a benefit show every year, we started doing that in 2002 and the third one we did in 2004 we donated a bunch of money to Red Cross, and I didn’t even receive a letter saying thank you, I didn’t even receive a letter that said we received your money, nothing, like and whatever am sure they are busy but how do I know where the money went? You know what I mean? And when I’ve donated money to Doctors without Borders they send a letter back, it’s like personally signed, typed and signed, saying thank you, saying thank you to me, its personal and then they give you access to the website and you can see where every penny went.  Whereas a company like Red Cross, am sure they do a lot of good things, I know that they do, but the kind of bureaucracy that exists, it’s possible that a lot of the money that people donate that they think is going to help people goes to other things.  That’s one of the beauties of Doctors without Borders, the other thing is that they don’t have a political affiliation, they don’t represent any governments they just represent people helping other people, and they are mainly volunteer based, I mean you get paid for doing it but you have to volunteer your time if you are a doctor or a nurse, you volunteer your time.  These people are all volunteering their time, going  into situations where they could be killed, they are going into IDP camps, going to war torn areas, areas where there may still be fighting and they are doing that knowing that, for just the good of humanity, how do you get better than that?  So there’s my long winded answer to that question! 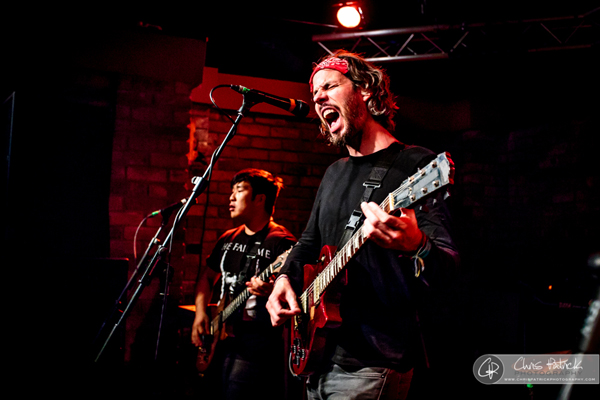 Sounds like a good choice then, now completely changing the subject, do you have any ideas of what the upcoming album is going to be called?

No not yet, we usually name it after the collection of songs is finished and we sit together and listen to it all the way through and then we think what can we name this?  It’s kind of like a child being born, some people have names picked out for a child before they are born but it can change when you see your child.

Is any of the new material going to be played tonight?

I think we may play one new song, but it’s the Resignation and then we play like 3 or 4 other songs off of a couple of other albums.  None of the songs are completed to the point that I would feel comfortable but tonight will probably be a small show so we’ll see, maybe.  We have like 2 or 3 that are pretty much done but lyrically that usually the last thing to finish and some of them are just kind of gibberish right now, just a bunch of words that I haven’t really decided which ones I am going to go with!  Maybe like the chorus is solid but the verses and some of the harmony vocals, some of the more involved guitar and keyboard sections aren’t done.

Thank you so much, will let you get back to the Ping Pong!

Interview and review by Josie Opal