It’s strange to think that West Side Story turns 60 years old this September. Especially when you consider the musical addresses a number of issues that are still pertinent over half a century later. But then much like the show itself, themes of love, rivalry and indeed, gang-related violence are seemingly timeless.

That being said, Carlton Operatic Society more than succeed in putting a fresh spin on this classic musical based on Shakespeare’s Romeo and Juliet. Tonight, tonight, it all began tonight (at Nottingham’s Theatre Royal). Now that the obligatory groan-worthy song reference is out of the way, we can all move on.

Set on Manhattan’s Upper West Side, our story focuses on two teenage sweethearts,Tony (Matt Wesson) and Maria (Ella Greenwood). Typically the course of true love never did run smooth as our star-crossed lovers hail from two rival factions. In place of Montagues and Capulets, we see teenage gangs running amok, fighting a small-scale turf war to reclaim the streets in their own name. 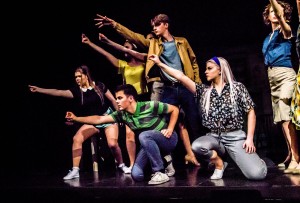 In one corner we have the Jets, a group of red-blooded American boys lead by the charismatic, if not single-minded, Riff (Patrick McChrystal). In the other we have the Sharks, a Puerto Rican gang fiercely headed by Maria’s brother, Bernardo (Paice Lees). Both sides are blinded by hate.

The Jets loathe the Sharks because they’ve trespassed on their territory and perceive the influx Puerto Ricans to be bad for American businesses. The Sharks despise the Jets on account of their casual racism and the decidedly unpleasant welcome to American culture they’ve been given. The presence of Lieutenant Shrank (Graham Ward) and his bigoted views only serves to add to the animosity. Although this type of narrow-minded attitude was typical of the 1950s, it’s sadly not too much of a stretch to draw parallels to Trump’s America in 2017.

Anyway, political observations aside, it all kicks off at a neighbourhood dance where Tony and Maria fall in love. You’d better believe this testosterone-fuelled feud soon escalates with tragic consequences, buddy boy.

Originally written and directed by Jerome Robbins, West Side Story gets a contemporary makeover here from Amanda Smith which results in many more light-hearted moments than I had been anticipating. That’s not to say this approach doesn’t work – because it does, fantastically so. The numerous jokes and innuendos dotted throughout the performance are executed by a cast with impeccable comedic timing,

Wesson and Greenwood’s voices complement each other beautifully as evidenced during a skin-tingling rendition of ‘Tonight.’ Both leads have a truly impressive vocal range and their easy chemistry was a joy to watch.
Unsurprisingly ‘America’ was the stand-out performance of the evening. I say unsurprisingly because it’s arguably West Side Story’s most famous number. Even those who have never seen the show would struggle not to recognise this energetic, jaunty tune.

Hats are well and truly off to Judie Matthews who plays Anita, Maria’s sharp-tongued best friend with a heart of gold. Her flawless vocals coupled with some tight choreography from the Shark ladies made for an aesthetically (and euphonically) pleasing performance. 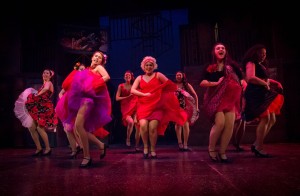 The only fault to be found within the show was the slightly shaky initial number which can be put down to opening night nerves and is easily forgiven. The entire ensemble fully recovered and then some to deliver a production that earned more than a few standing ovations in the stalls.

Fair Verona may have been substituted for downtown Manhattan but soul of The Bard’s classic still rings true albeit with a marginally less tragic ending. Emphasis on the marginally. I would be surprised if you didn’t find yourself blinking back tears by the end of the performance.

West Side Story is showing at Theatre Royal from May 30th – June 3rd.
Tickets are available from £12.50. www.trch.co.uk