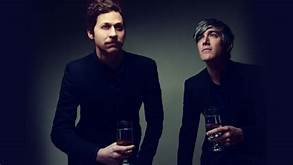 I can remember when ‘We Are Scientists’ burst onto the scene in the early noughties.

At the time they were getting played on Radio1 a lot (we all started there, right?) and I definitely remembered liking their distinctive style of New York based Rock music which, to my ear, set them apart from other bands at the time.

Songs like: ‘The Great Escape’ and ‘Nobody Move, Nobody Get Hurt’ will always be linked to that adolescent time of life for me. So hearing they were hitting up Nottingham’s intimate ‘Rescue Rooms’ venue I was eager to go and catch them in the flesh… and I certainly wasn’t disappointed.

The band, consisting of vocalist and electric guitarist, Keith Murray, bassist, Chris Cain and drummer, Kieth Carne, belted out a great selection of older classic numbers as well as a range of recent releases off their new album ‘Huffy’.

It was quite a treat to be so close to the band on stage as they performed which is one the great things about gigs at the ‘Rescue Rooms’.

As well as being struck by how youthful and energetic they all looked considering they’ve been around for a decent amount of years (for bands that is), it was also great to see how well they interacted with the crowd as in between each song there was plenty of good banter, jokes and general chit-chat with everyone who had made the effort to come and support them.

It was obvious that there were a lot of fans in the room as the crowd was bouncing and singing along with many of their songs and it appeared everyone was having a great time.

All in all it was a superb gig and made for a great Saturday night out. Bravo!