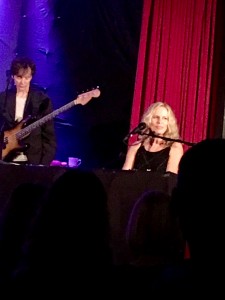 The  multi-Emmy, Golden Globe and Grammy award winning artist is best known for being the former musical director of Ally McBeal, writing the theme song ‘Searching My Soul’, and appearing in every episode of the hit television show Ally McBeal, in which she played a resident artist at the bar where the show’s characters drank after work. However, the intimate setting worked really wonderfully.

Vonda recently made her stage debut in Randy Newman’s musical Faus, however the tour follows last year’s sell-out UK run in support of her latest album ‘Rookie’ produced by Mitchell Froom (Crowded House, Elvis Costello), with Vonda saying “I had so much fun performing for my fans in the UK, it was the highlight of my year”. Embracing all things British tonight she tried her hand at the accent and even sipped on a cup of tea between numbers, during this, her 8th UK date of a 9 date tour. 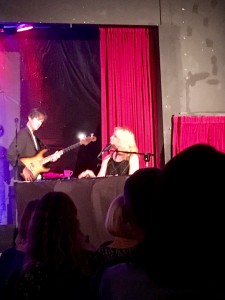 It was after her third album that Shepard was signed up to appear on Ally McBeal after being spotted by the show’s creator David E. Kelley. While on the show she recorded two full soundtrack albums and was featured on two other Ally McBeal compilations. The songs Shepard recorded for Ally McBeal soundtrack albums were mainly covers of old songs with lyrics that paralleled what was happening in the title character’s life onscreen. However, the album’s biggest hit single, “Searchin’ My Soul” which she performed tonight, along with other favourites from the show getting the the crowd on their feet, was an original penned by Shepard and Paul Howard Gordon. Since appearing in the show, Shepard has released more studio albums and a live album, songs from from which the audience were treated, including her latest album Rookie, which was released last year.

Since the TV show ended its five-season run Vonda has released five studio albums and toured extensively across Europe and USA.  She has also performed duets with legendary artists including Rod Stewart and, famously, Robert Downey Jr.
Influenced by singer songwriters such as James Taylor, Carole King, Paul Simon, Jackson Browne, Vonda’s fabulous voice filled the hall, supported by three talented musicians, who between them had worked with the likes of Bruce Springsteen and Tina Turner.
The hour and half set ended with an encore which included Tell Him, Proud Mary and slow rendition of I Only Wanna Be With You.