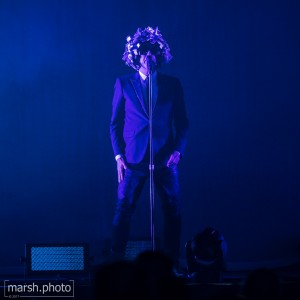 Having listened to Neil Tennant and Chris Lowes’ music from infant to adult, I struggled to think, while awaiting their performance, of any other artists from their era still performing to packed-out national arenas of fans and followers like the one I was in.

About to give them the benefit of the doubt, I don’t think I was quite prepared for the electric nostalgia I was about to feel, however this was more than just a greatest hits set.

Almost four decades into a career which has continuously proven that pop music, electricity and art can co-exist, the Pet Shop Boys are still at it, resembling the original “Pop Kids” they lament about in their third song of the set and second track of their 2016 album, Super – an acid house reflection of the 90’s club scene, still very much applicable today.

Emerging from behind two large colour pods (which would form the central aspect of their light shows during the night), dressed in dark suits with heads encased in futuristic style headgear Tennant and Lowe open their set with initial teaser track and title of their tour Inner Sanctum, giving a rise to a furore of excitement from the mixed crowd – comprised of a mixed audience of fans and followers, young and old.

An awakening reminder that almost 40 years after debut track West End Girls was released, the pair can still produce and perform new material that is well-received.

With a reputation for visual and theatrical staging, it’s unsurprising that Inner Sanctum was just that, encompassing theatre, cinema and an impressive laser-show reminiscent of 90s club culture.

The pair having previously written for musicals and film sound tracks have produced a tour and atmosphere that mirrors the hyperbolic atmosphere of the clubbing scene, and well! The visuals and magnificent light shows, particularly in the second half, seemed to make up for the distorted sound quality of the first, which unfortunately made Tennant’s vocals a little echo-ey in places even if it didn’t phase the crowd who moved in euphoric waves. I did wonder if this should have been a standing gig?

Keeping to tradition Tennant and Lowe’s characters remained unchanged, much to the pleasure of loyal Pet Shop Boys fans – Lowe remained motionless for most of the set, while Tennant, who undergoes a costume change into a sparkly, metallic number mid-way point, was transfixed to the music, elated and in his element, particularly when joined on stage by similarly dressed dancers for the more upbeat numbers.

A third of the set, was made up by tracks from recent album, Super, interspersed with renowned top 40 hits such as Domino Dancing, West End Girls and Opportunities (Let’s Make Money) which all seemed to work in harmony – you wouldn’t think that their releases had spanned decades.

Eccentric, elating and joyous their performance was suitably concluded with a reprise of Pop Kids, so much so, that I was left feeling like one.

Photo by Andy Tatt for NottinghamLIVE