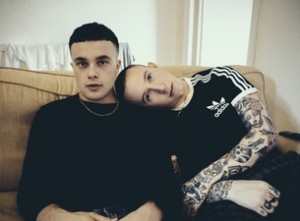 “I’ve only gone and done myself a mischief,” says Isaac Holman, one half of the English punk rock duo, Slaves, as he holds up his strapped-up fingers and thumb to the sold out crowd at Rock City – a hint that he wouldn’t be playing the drums tonight but owning the mic.

It’s a bold move by the band, a duo made up of Isaac (on vocals and drums) and guitarist and bassist Laurie Vincent, to continue their tour in the face of injury – they’ve already got the stick previously for their absence of a hi-hat in their early days performing on the Tunbridge Wells pub circuit (they even recorded an ode to it). However Isaac hints that fans needn’t worry as supporting Lady Bird’s Joe Walker had managed to save their bacon and learn the entire band’s set in just two days. And, as he owned it – I realised he was just one of the reasons Lady Bird had become Slaves first signing to their own label Girl Fight Records.

The duo opened with their energetic rendition of Skepta’s hit “Shutdown” reminiscent of the band’s 2015 performance on BBC Radio 1’s Live Lounge – and the crowd got the hint – they were about to shut the place down. It’s rare that rock and UK rap can fuse so well, but it electrified the audience of mixed ages into fist-pumping, mosh-pitting chaos – and things could only get better.

It only takes the closing lines of the band’s latest single, Magnolia, before Isaac has stripped down to the waist. He may not be playing the drums but there are no compromises in energy here and even Laurie’s hint at the fact the drummer was in constant agony isn’t enough to quell his energy.

This is how the band have become so well known – their commitment, their energy, their enthusiasm – and even with just two sets of instruments at their disposal throughout the set they’re never anything less than arousing to watch.

Their set is a mixture of old and new with tracks such as F*ck the Hi-Hat, People that you Meet and Where’s your Car Debbie? interlaced with the crowd pleasers Cut and Run and finale Hunter. A particular highlight was Cheer Up London which brought with it a furore of excitement and chanting.

It’s the first of many gigs I have been to in the past decade that hasn’t been ruled by the smartphone. This one was ruled by the senses. The point where Holman tells the crowd he doesn’t want to see a single phone out as he sings the melodic Photo Opportunity from their recent album Acts of Fear and Love, they obey – it’s ironic because as the lights bathe the stage illuminating the duo’s silhouettes against their titled backdrop, it definitely brings with it a photo opportunity.

Ferocious and dynamic the duo have a chemistry I’ve rarely witnessed between live performers before with brotherly clasps and brief clinches between songs – they even have the crowd “ahhh-ing” at a point, but the greatest moments come with their big riffs and on stage aerobics. They may appear to be an unruly pair but Isaac and Laurie do get a little soft, keen to ensure the crowd were taking care of each other “if anyone gets hurt or anything, just let me know” says Isaac. While Laurie shouts “we don’t condone violence, even though we might look like we do!”

In a world travelling in varying political and social directions the Slaves offer a realistic, empathetic response to the current state. Incredible live, my only regret was the lack of an encore.