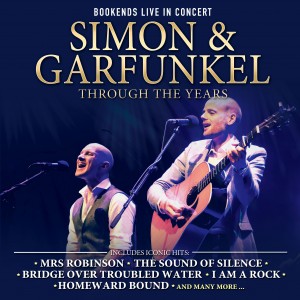 I’m of a generation that grew up crying at the sound of Art Garfunkel as cartoon rabbits died.
To be totally honest that still gets me now, but together he and Paul Simon provided a soundtrack to their life, well certainly their youth, many of who will probably never have seen the duo live. Dan Haynes and Pete Richards (collectively known as Bookends) thankfully you will hear to the originals.
They make it clear from the start of their gig at Nottingham’s Royal Concert Hall, that their show is a tribute to the music of Simon & Garfunkel. They don’t try to look like them, nor should they, physically they don’t look the same and I’ve seen more bad wigs at tribute shows than I care to remember.  This show therefore is solely concentrating on the music, nailing those harmonies. The decision to concentrate on nailing the sound and harmonies.
I’m not a hardcore Simon and Garfunkel fan (I had a friend at college who fumed when Hannah & Her Sisters covered Bridge Over Troubled Water ) but I can appreciate a good song when I hear one, and in my book they had many; The Sound of Silence, Mrs Robinson, The Boxer (which Rolling Stone magazine named as a classic), Scarborough Fair to name a few. 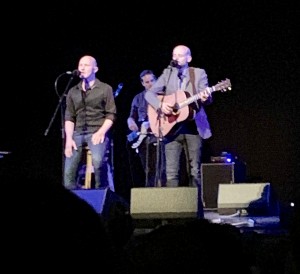 The stage set is simple.  No big screen with images, no acting, just our duo and their band, instead reading on the strength the material to entertain and win over the audience. It felt a little of a slow burner despite the hits, but then it’s pretty chilled out stuff.  Folk Rock is hardly ‘Get up on your feet’ music, though the crowd did in the encore for Mrs Robinson.  The evening is a night of pure music interspersed with a little story telling from formation through to success, global stardom, fall-out and reunion.
We hear also the story of bookends.  A duo clearly not put together for the money, instead friends who met at school and shared a mutual appreciation for the love of Simon and Garfunkel music, who practised to emulate that distinctive sound. They have played at the Concert Hall previously, but interestingly, their first gig was at the Bonnington Theatre in Arnold.
The audience warm up as the evening progresses and hit follows hit.  Richards ‘Bridge Over Troubled Water’ being a massive crowd pleaser. The band also look like they’re enjoying every minute.
It’s an absolute must for fans, who will fully appreciate the work gone in to choosing the arrangements for the tracks from studio releases to live performances.  A stripped back section of the show which echoed the early years saw just the duo and a guitar.  A further chance to appreciate the tight melodies, whilst a visit to a reunion had everyone on their feet for Diamonds in the Soles of her Shoes, Cecilia and You Can Call Me Al (Incidentally, I have another friend who for years thought Paul Simon was Chevy Chase thanks to the letters memorable video)
Not only emotional, but a reminder of the talents of the songwriting duo.  A beautiful performance which I recommend everybody needs to catch.
Oh, and they don’t do Bright Eyes.
Words and additional photography by Tanya Louise
Editor
Visit My Blog
Visit My YouTube Channel
Find Me On:
Twitter Instagram and Facebook
Share this content....