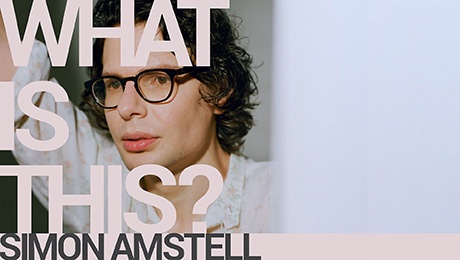 Last weekend Playhouse played host to Simon Amstell returning to stage with his international What Is This? tour. It’s been a good few years since I last saw him live and I was very much looking forward to some original topical material, especially after his recent BBC release of Carnage.

It was a cold night and as I waited (and waited) for my fellow comedy goer to arrive I enjoyed a lovely pint in the bar watching as the audience grew in both number and excitement.

As we finally took to our seats, just in the nick of time, we were unexpectedly treated (and it was most definitely not a trick) to Mawaan Rizwan. Now if you haven’t already heard or seen this guy before I strongly urge you to check him out, there’s plenty of material on YouTube (in particular see his stand up from Edinburgh Fringe 2016).

It’s hard to describe Mawaan, it’s best to describe my cheeks after his warm up, they genuinely ached. He was so funny, and such a contrast to Simon it was a real shock to see him booked as his warm up. It was also disappointing, in as much that I’d rather had seen him for longer and was concerned that Simon wouldn’t be able to follow such a performance. He couldn’t. His material was vaguely based on the same themes of compromise in a relationship and homosexualality, however Mawaan had covered it and covered it much better.

Simon’s material had a stronger air of self indulgence than usual and felt laboured. He covered topics such as mental health and family expectations, whilst done well it wasn’t done as cleverly as he is most definitely capable of. Not to say it wasn’t funny in lots of places it was (especially the stuff about his drug taking experiences) it just wasn’t Mawaan!