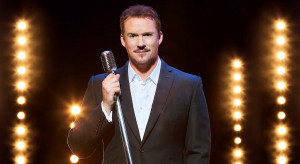 It’s actually 21 years, but COVID delayed the originally planned tour and instead Russell spent a few weeks roughing it this time last year in a castle in Wales for I’m A Celebrity.

From humble beginnings in his local working men’s club, Russell Watson enjoyed a meteoric rise to fame. ‘The Voice’ entered the Official Classical Artist Album Chart at No 1, becoming the biggest selling classical album of 2000, yes, it really is that long ago!

So, has he still got ‘The Voice’?   Russell, 55, by his own admission, is now ‘middle aged’ . He doesn’t look it, he still has the same boyish good looks and cheeky smile that got me following his ‘career’ all those years ago.  Call me fickle, but I’m sure I’m not the only one who suddenly developed an interest in classical music after watching Russell on BBC One’s Last Choir Standing.

His voice has however  matured. Maybe, with a few exceptions,  we get to an age where we know pop isn’t quite where our future is heading, and certainly some of Russell’s softer, more pop vocals now sound more theatrical.  Not a criticism – just an observation. The voice though is as strong as ever. As nice a venue as the Concert Hall is, I feel like Russells voice should be filling an arena, it’s so big, it’s where it belongs.

Russell performed some of his most loved songs and career highlights from the past two decades. Opening with O sole mio, otherwise known as the Cornetto song. We were all thinking it – Russell mentioned it. If you’re old enough to remember the advert, you’d have fit right in with the mostly mature audience, who no doubt have followed Russell’s career from the beginning.  A career which has seen him top charts both at home and abroad, perform for Popes and Presidents and open global sporting events from Champions League and Rugby Cup Finals to the Commonwealth Games.

Russell chatted with the audience between well known numbers from his albums, using tracks to poignantly connect his life experiences. There were some omissions that surprised me, such as Nessun Dorma and Nella Fantasia, but lots of fan favourites including Volarie, Music of the Night, You Are So Beautiful and some gems that I wasn’t expecting such as Send in the Clowns, Beautiful Dreamer and a fantastic version of Barcelona for which he duetted with guest vocalist Laura Wright.

Next in the diary for Russell is a role as Billy Flynn in the musical Chicago. It would be great if he continues on the musical’s path to appear in Phantom of the Opera, a role he was made for. Either way, I hope we’re all be back in another 20 years for the 40th Anniversary of The Voice (OK, technically 19)