PRISMA CLOTHING were the hosts of exemplar Nottingham talent under one roof on Thursday night, bringing funk, soul, alternative and indie music to delight the ears of Nottingham folk alike.

Up first was ROB GREEN. Opening with ‘Paradise’, his soulful and strong voice filled The Bodega. One particularly special moment during his set was perhaps when Rob dedicated a song to one of his friends in the crowd, a mellow and meaningful track which saw the crowd witness a ‘bro moment’ so to speak. Afterwards he proceeded to do a mash-up of songs from the previous two decades, getting the entire audience singing along to hits such as ‘Say My Name’ and ‘Yo Home to Bel-Air’, which was insane.

Up next were CROSA ROSA, who blew the audience away with their heavy sound. Their high octane and energetic set, following on from Rob’s more laid back one, really revved up the crowd and all eyes were on them as they sung a mixture of older and new material.

Following them was BAYBO SQUAYBO, whose line up includes former members of ‘The Fade’. Their upbeat, experimental and distorted indie rock was fun and entertaining, and very different from any other indie bands out there. 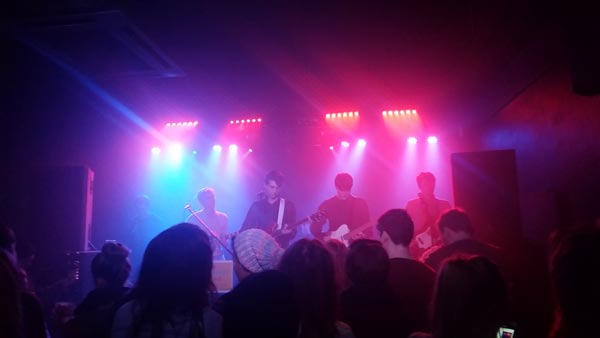 Onwards to the final act and THE GORGEOUS CHANS take centre stage for the first time in their new arrangement. The seven strong Future Sound of Nottingham 2013 winners brought the crowd alive with their upbeat and lively set. Songs such as ‘San Sebastian’ created a lively atmosphere and some new material was previewed too, which the myself, and the audience, no doubt can’t wait to hear again once it’s released.

A fantastic and energetic night for performers and audience alike. Huge thanks to PRISMA, we hope there’s more to come in the future!