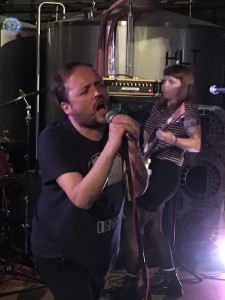 I love beer and I love live music so what could be better than the two of them together? I’m Not From London and Black Iris Brewery present their 6th monthly Piss Up In A Brewery event, which brings together four bands and a range of beers in a totally unique live music setting. 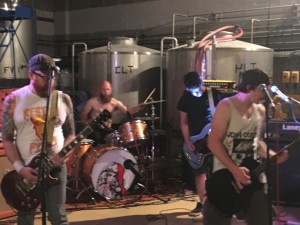 First up is Grandmother Suplex, a hirsute four-piece playing heavy metal. With a topless drummer and the full gamut of facial hair from moustache through to full beard, they rock that late 90’s riff led heavy metal. The lead singer and the guitarist do that call and basso-profundo response thing and the guy at the front of the crowd with the Mohican absolutely loves it. 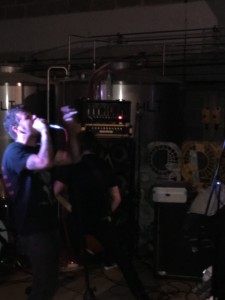 Second on are Bloody Hard. They have another bearded drummer but be-shirted this time and they are more rhythmic and less riff-heavy but with more shouty vocals. The singer clearly thinks that he’s in some hardcore punk band as he leaps into the crowd and tries to get started with a guy who’s easily in his 50s. To be fair, the bloke looked like he was loving it even when he ended up on the floor. In my mind, the singer was just lucky that this isn’t the 70’s anymore as someone would have just lamped him one. 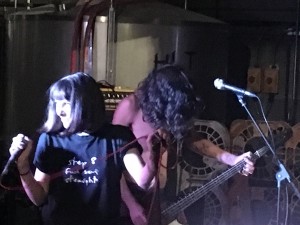 Then we have Casual Sect, a four-piece from London, who go down the topless bassist route. Clearly they are a band who believe that you can never have too much delay on anything – there’s so much that it’s hard to understand what they’re trying to say to the audience between songs. To be honest, they are a bit of a shambles and not in a good way – they don’t actually manage to finish songs at the same time. Have the singer and guitarist from Bloody Hard join them on trumpet and trombone respectively for the last song doesn’t really help matters either. 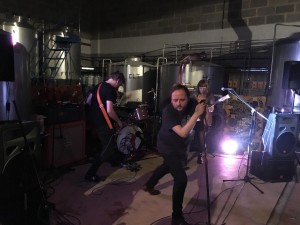 Finally, the real stars of the show, Grey Hairs. By far and away the best band on the night, I hope that they won’t mind me describing them as middle-aged grunge. And it’s very much pre-Nevermind, before grunge was cool grunge. It’s an interesting juxtaposition watching people of a certain age sing such emotionally charged songs but they are bloody good at it. They also have some variety – one new song sounds like Nick Cave singing Columbia by Oasis and their encore is a brilliant 60-second blast of punk.

As well as the excellent Endless Summer and Bajan Breakfast that have both made themselves well known throughout the city, there was also the fruity Strawbeery Milkshake. There’s also the new Mog’s Pale, a session ale, on offer amongst other delights.

Unfortunately, this is the last Piss Up In A Brewery event of 2016. I’ve been to three out of the six and I’ve had fun at all of them so I hope that I’m Not From London will be bringing back gigs to the Black Iris Brewery sometime in 2017.

Review: Piss up in a Brewery, Black Iris Brewery, Nottingham

Gallery: Piss Up In A Brewery, Black Iris Brewery, Nottingham

Review: Piss up in a Brewery, Black Iris Brewery

Review: PIss Up In A Brewery – Black Iris Brewery Nottingham