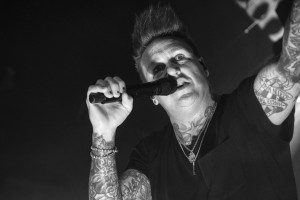 Californian nu-metal megastars Papa Roach rolled up in Rock City tonight on the latest leg of their world tour promoting their tenth studio album ‘Who Do You Trust’, bringing with them Nothing More.

I’ve been looking forward to this gig since the last time Papa Roach came to Rock City.

First up on stage were ‘Nothing More’, from San Antonio, Texas. Now these wouldn’t be your usual support band as they’re hugely successful with multiple Grammy nominations, Nothing More have recently toured with Five Finger Death Punch and Breaking Benjamin over in the USA, as well as their own world tours. Jonny Hawkins is the main focus of the band and covers every inch of the stage as well as climbing a tall pole/ladder and also playing a oddly looking drum kit as well as riding what looks like a scorpions tale in springs.

Not long into their set Jonny opens his shirt takes it off and pretty much bears his 6 pack body to the young ladies in the crowd as he carries on with the set.

Then, after much anticipation throughout the sold out venue, Jacoby Shaddix and the rest of Papa Roach enter the stage and launch straight into their monster anthem ‘Last Resort’. They make their way through’Who DoYou Trust’ and single’Renegade Music’before hitting’Between Angles and Insects then going back to songs from Who Do You Trust. By this time the crowd were in full swing singing loud word for word with every song Papa Roach had Rock City in the palm of their hands. Blood Brothers was meant to be next like on previous shows but was changed to Crooked Teeth but as the crowd were in such great spirits, before we knew it we were blasting through the set getting to the encore. 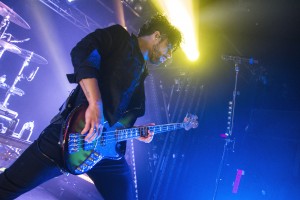 Now the encore was pretty cool because not only did they play Infest & Born For Greatness, Jacoby and the Papa Roach guys played Fire Starter in tribute to the late Keith Flint. The 2000+ crowd cheered with a big raw but sang every word. There is no doubt about it even in their forties Papa Roach can still sell out venues but also put on one epic show. 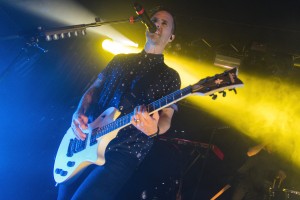 Who Do You Trust?

Not The Only One