The 2016 Oxjam Beeston takeover saw 15 different venues hosting live music to raise money for Oxfam. I grabbed a seat at The Hop Pole to check out what was happening. 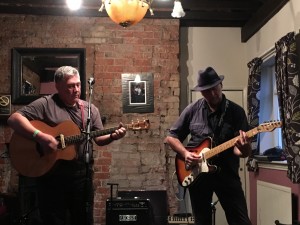 The evening programme kicked off with The Halam Sessions, a two-piece featuring one acoustic and one electric guitar. The deep rich voice and the gentle interweaving guitar lines make them sound a little like an acoustic take on The National. In fact the song Miss You The Best could easily have found its way onto Trouble Will Find Me. There are also little bits of blues and little bits of 1970’s Bob Dylan including one song that sounds like Knockin’ On Heaven’s Door. While they are a little one paced, their music is good and it’s a nice way to start things. 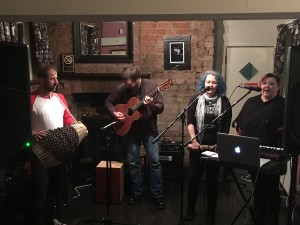 On second were Foreign Accent, a Hungarian folk 4-piece. Compared to traditional western folk music, it’s a bit quicker with more strummer on the guitar rather than finger picking and there was also a level of percussion that gave it a little more depth of sound. There’s only one song in English, a cover of Scarborough Fair, which doesn’t sound as good as their Hungarian songs even though I have no idea what they are singing about. 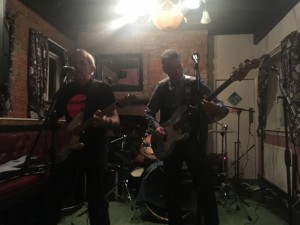 Blue Shack, a three-piece rock n roll band, aren’t trying to re-invent the wheel. On the same Saturday night as Oxjam, there will be hundreds of bands in hundreds of pubs throughout the country doing a very similar thing. But they’re good at what they do and they’re a pretty tight band. Later in the set they are joined on stage by a harmonica player and they get more than a few bottoms wiggling in the crowd. The only song that I recognised was For What’s It’s Worth by Buffalo Springfield but I couldn’t tell if that’s because I just didn’t know the other songs or if it’s because they were originals. If it’s the later, then they could easily have been mid-60s rarities. 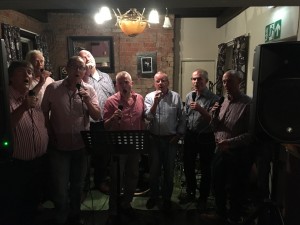 The penultimate band, Oldish Spice, had already played at a couple of other venues during the day by the time that they arrive at The Hop Pole. They are a 9-piece harmony group featuring guitar and eight singers. The easiest way to describe it was that they’re like a barbershop quartet with more members. After opening with Pretty Flamingo by Manfred Mann, they run through I’m Into Something Good by Herman’s Hermits and Days by The Kinks. They sound brilliant and their harmonies bring a summery feel good mood to the whole pub. There’s a slightly odd three song folk section that takes away a little momentum as the audience doesn’t know the songs. However, they get everyone back onside with a finale of The Kinks’ Sunny Afternoon and an encore of Goodnight Sweetheart. 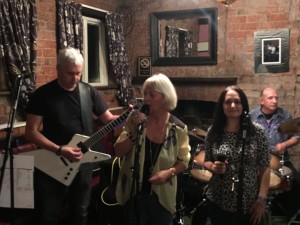 Finally we have headliners, The Cluedo Club. Opening up with Proud Mary, they quickly fly through House of the Rising Sun and Sweet Home Alabama. Their take on chugging blues rock proves immensely popular with the crowd as everyone is up dancing for the last act of the evening. It’s no surprise that play Bad Moon Rising but there’s a slightly unusual mash-up of Twist & Shout and La Bamba that doesn’t quite work. The drummer pops on a fez and picks up his light-up drumsticks for the closer Johnny B Goode. However, the audience like them so much that they won’t let them leave and they have to play not one, but two encores, playing Rockin’ All Over the World and Born to be Wild.

So a pretty raucous end to a great evening that raised a lot of money for a great cause and entertained a lot of people. But that’s not quite it for 2016 as there is also Classical Oxjam to come on the 12th of November. For more information, check out the Oxjam website: https://oxjambeeston.org/home/

Album Review: Prime – Before the After