The Nottingham music scene is a strange beast;  we are the envy of the country when it comes to the amount of talent we have in this city, if you stood in the centre of town and threw a cup of water in the air, at least one person getting splashed would be a musician. On the other hand, it is at times a strangely inclusive scene in which the only other people you see at gigs are other musicians, along with promoters, writers and broadcasters. With that in mind, it was gratifying to observe that a large portion of the (admittedly not as big as it should be) audience were what I call ‘civilians’. We have a vast pool of musical wonderment, but not enough people seem to want a paddle. 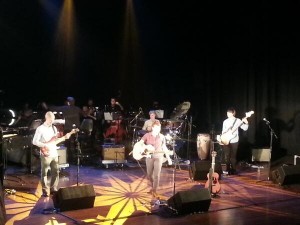 The first performer on stage was the gifted songstress GEORGIE ROSE and her band, rather fitting really given that her name has been attached to almost every big festival around these parts this season.  Her festival big stage stripes well and truly earned, she appeared remarkably unfazed about appearing in the grandeur of the Theatre Royal with an orchestra backing her up. Opening with ‘Calmer’, she slipped very comfortably into her act and performed like the star she will one day be. She took to the piano for ‘Love Me Again’, a genuinely beautiful moment that moved my girlfriend to tears (who also pulled that ‘no way!’ face when I told her that Georgie is only eighteen) and made every hair on your body stand on end. 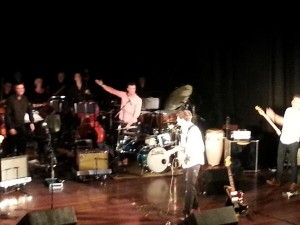 AMBER are a band who either are owed a lot of favours or have done a deal with the devil, such is their rapid ascent since their formation last December. Not that they aren’t a talented bunch because they are, but there aren’t many bands who have achieved in an entire career what Amber have so far. There’s no Nottingham blood running through their veins, but settling here is criteria enough as we all know, besides they did form here at university and that’s good enough for us. I wonder if they have had mushy peas with mint sauce yet. That’s the citizenship test right there.  They opened with ‘Heaven’, and at first it felt as if (to my ears at least) that the full band sound was drowning out the orchestra and making their presence a touch redundant. As I’m writing this review while listening to them I can clearly tell the difference, so the orchestra complimented them as they should. They seemed genuinely pleased to be a part of the night, although this is only their sixth gig it was considerably smaller than their fourth and fifth, Reading and Leeds festival. 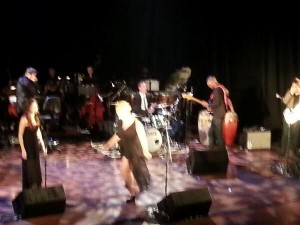 The penultimate set was HARLEIGHBLU, who looked as amazing as she sounds. Taking the much deserved opportunity to promote her upcoming debut album, she opened her set with two tracks from it; ‘Enough Now’ and ‘I Believe’. It is a lazy journalist-come-reviewer that uses comparisons with the likes of Ella Fitzgerald or Nina Simone, but there will be a day in the future when Harleighblu is mentioned in the same breath. Taking the brave step of performing a never before performed song, we heard ‘Love Like This’ before the current single ‘Play Me’. Harleighblu delivered a breathtaking performance throughout. 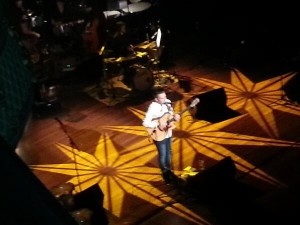 Finally we had SAINT RAYMOND on to close the show. Callum has had a good year; festivals, a record deal, national and American radio play, and of course a much coveted live session on NottinghamLIVE. With all that under his belt, headlining this was no doubt a walk in the park. At least it would have been had it not been for the pesky gremlins at work. Before he’d sung a note there was a problem with the monitors that might have been difficult for a less confident artist to come back from. Those problems didn’t affect his overall performance thankfully, and he played a blinder of a show, winning the battle of singer versus monitor. Standing centre stage, he was the only act of the night to perform alone (not counting the fourteen piece orchestra, but you knew what I meant), joking that the orchestra knew the songs better than he did. The orchestral backing suited him down to the ground, so maybe he should consider doing this sort of thing more often? Mocking the tradition of the encore, Callum walked off to deserved applause and calls for more, returning moments later announcing that he loves the silliness of the concept and the waste of thirty seconds that it really is. The final song ‘Fall At Your Feet’ sounded wonderful with the orchestral aid, and definitely worth doing as a commercial release. 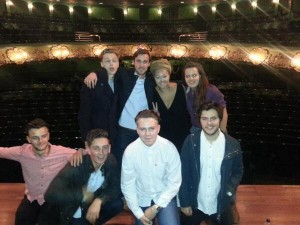 As a footnote to what I said at the start, I took my girlfriend Mandi to the show and she hardly ever comes to local gigs with me. However, every time she does she becomes that performer’s newest fan. It happened again tonight, especially with her discovery of Harleighblu and Georgie Rose. I don’t know many people outside of the music world in Nottingham, but those that I do are going to be invited out more and you should do the same. Here’s to you Nottingham, you might have no respect for buildings, history, or popular opinion. You might want to turn every building into student flats and Tesco Express, but that aside you do indeed rock. Long may this city continue to rock!