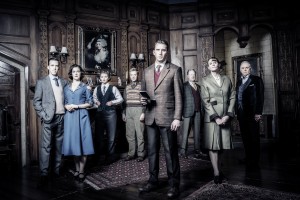 It’s a little known fact that The MouseTrap has actually come home to Nottingham.
Because this is where the iconic play first began some 67 years ago. Going on to run continually in London alone right up until its 60th anniversary when it went out on the road.  Seven years later and it’s touring again.

Everybody has heard of Agatha Christie, and you’ve probably heard of The MouseTrap, although this was the first time I’d seen it, so I had no idea ‘who’d done it’ and didn’t scour the internet for clues. in time-honored MouseTrap tradition, you won’t find any spoilers here either.
Quite why the show is so popular and has enjoyed such longevity is a mystery in itself, it just has! It’s not particularly a masterpiece, nor is it likely Christie’s best work, but it has a certain charm about it, and, considering it’s a play about murder, it’s all done in a jolly light-hearted manner. You find yourself immersed in the cosy setting of Monkswell Manor and the delicious suspicion of its inhabitants.
There was more camp and humour than I expected and some of the acting seemed to have its tongue firmly in cheek, but the eight-strong cast, directed by Gareth Armstrong deliver the dialogue and its red herrings in such quintessential British fashion, it’s hard not to love this stereotypical view of England’s past.
Each of the suspects has a story which becomes unraveled whilst snowed in from a blizzard in a one to one with  Police Sergeant Trotter (Geoff Arnold) who appears to warn them that somebody wants one or more of them dead for the part they played in a case of child cruelty some years before. Among them is a retired major (John Griffiths), an eccentric Italian (David Alcock), the prickly Miss Casewell (Saskia Vaigncourt-Strallen), a lovable cheekily camp architect (Lewis Chandler) first time hotel owners  (Nick Biadon and Harriett Hare) and a fierce and critical Cassandra from Only Fools and Horses (Gwyneth Strong) – none are above suspicion.
What unfolds is a cunning whodunit, although  Christie fans would probably have worked out who the killer is long before the truth comes out on stage. As the curtain falls, the audience is sworn to secrecy over the identity of the murderer – as they have been at every performance since 1952. Lets keep it that way – Long may it continue to entertain the next generations.
By Tanya Louise
Editor
Share this content....

Review: Let It Be

Theatre Review: The Curious Incident of the Dog in the Night-Time