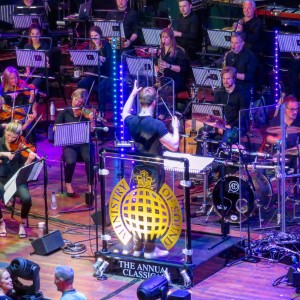 “Nottingham, we’re a sellout” announces host, legendary DJ Brandon Block as he addresses a packed Royal Concert Hall.
We’re here for Ministry Of Sound – The Annual Classic, with a 50 Piece London Concert Orchestra led by conductor Lee Reynolds, sensational vocalists and a guest appearance from Livin’ Joy lead singer Janice Robinson.
A short film precedes the gig, a history of the Ministry’s humble beginnings in the early 90s around the Elephant and Castle right through to the global success it’s become today.
Sandstorm by Darude kicks us off and we’re treated to a mix of dance classics beautifully & seamlessly woven into each other. Favourites like Sunchyme by Dario G, and a live vocal performance of Livin’ Joy’s Dreamer follow.
The first part of the show largely consists of sets of several hits, and while tunes like Fat Boy Slim’s Right Here, Right Now use the original samples others such as I Luv U Baby by The Original and Lola’s Theme by Shapeshifters are brought to life by a trio of fantastic female singers.
Dance moves aren’t a huge part of the proceedings (apart from the audience who are  loving every second of it) but there is something so beautiful about a string section moving in unison to recreate this glorious genre of music.
The laser effects are stunning. Add to that a bass so strong it distorts your vision, you hardly need dance moves anyway. 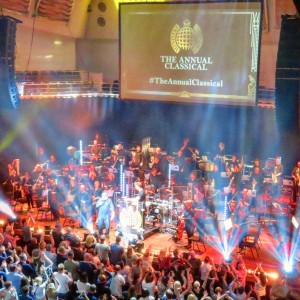 Complete songs follow. Children by the Robert Miles and Olive – You’re Not Alone to name but a few. Zombie Nation shakes the Royal Concert Hall to it’s foundations.
There is no encore, it’s hardly fair to get 50 musicians (who worked tirelessly all night)  to shuffle offstage just to come back on again. Instead Brandon Block thanks everyone for coming and Lee Reynolds raises his baton one last time for a mind blowing version of Insomnia by Faithless.
I’m not sure how many of the audience had a genuine sleeping disorder but I guess everyone went home on a high after witnessing this breathtaking performance.
Words and photos by Richard Newbold
Share this content....

Review: Piss up in a Brewery, Black Iris Brewery, Nottingham