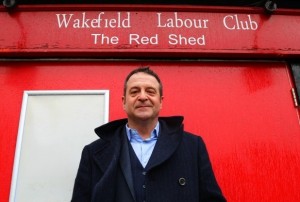 On the 50th anniversary of the opening of the eponymous Wakefield building, Mark Thomas brings his show, The Red Shed, to Lakeside Arts

As the name suggests, The Red Shed is a shed. And it’s red. It’s a 47 foot long single-storey, wooden building in Wakefield, illuminated by the neon sign of a nearby Debenhams. Across the street is a two-storey brick building that used to be home to the local Conservative club. It was here where Mark Thomas performed his first gig and it was here that he returned to in order to try and find out the truth behind one of his best stories.

In 1989, the New Musical Express ran a feature on up and coming comedians. They wrote about Bill Hicks, Eddie Izzard, Jo Brand and Mark Thomas. As part of the article, they interview Mark and asked him where his politics had come from. He told a tale of being in Yorkshire in 1985 – he’d been invited to join a miners’ back to work march because of everything he had done for the striking miners. As they walked back through a village, the pupils in the school came out and sang to the miners:

They sang to their fathers. They sang to their brothers. This is one of Mark’s favourite stories, one he has told many times since that NME interview in 1989. But did it actually happen? The core of the show becomes a road trip to try and find the school and to see if anyone else can remember that march back to work.

Mark investigates several possibilities for the village and the school with the help of six audience members who use masks to play key members of the story. Audience interaction isn’t limited to those on stage as at one point, we’re all invited to stand and sing the anthem of The Red Shed (a re-wording of The Red Flag naturally) Along the way, we find out that Greggs is fully unionised and that a new union in the Wakefield Weatherspoons not only managed to move the EDL meetings that were being held in the pub but also stopped any other local pubs taking them in. After a few dead ends, Mark eventually finds the school and even tracks down the teacher that took the pupils into the playground on that day. 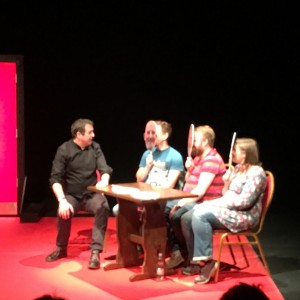 Through Facebook, Mark even managed to make contact with some of the pupils themselves. Unfortunately, none of them can remember the day at all. As Mark says, “we have let them forget”. This is the crux of the show – the power of stories and how important the stories that we tell are to us and our communities.

Michael Gove says that people aren’t interested in experts anymore. Which is why our stories have to better than theirs and why our stories have to be true. This is why the voyage was so important to Mark. Although of the three people who remember the day, they all have slightly different recollections. Mark remembers the children singing but not the teacher, a shop steward on the march remembers the singing and the teacher crying and the teacher herself remembers the crying while the children were in the playground but can’t remember the singing.

All in all, it’s a tremendous show. By turns, it’s funny, moving, thought provoking, depressing and incredibly powerful. I laughed, I cheered, I sung and I cried. Such an amazing night.