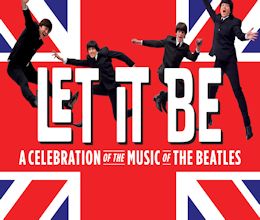 You have to wonder if Lennon and McCartney had any idea of the brilliance and longevity that their song-writing might create, or indeed how we’d still be listening to their music around the world for many decades later as we were at The Royal Concert Hall for Let It Be.

Imagine your typical jukebox musical, the music is combined with a script which tells us something about the life of the artist or tells a story. However in ‘Let It Be’, there is no script as such – we speed through 40 of the best loved songs of The Beatles from the iconic hits such as ‘Hey Jude’ and ‘Let it Be’, beautiful reditions of ‘Yesterday’ and ‘Elenor Rigby’ to some lesser known ones which are simply left to speak for themselves, performed by a quartet of accomplished look and soundalikes. The format is more akin to a concert with biographical elements than a musical. There’s a bit of chat, and audience interaction but that’s it.

The evening follows the group’s changing sound, and fashion, from the first days of the Cavern Club in 1962 to the height of Beetlemania, the odd brilliance of Sgt Pepper and finally to the bearded Magical Mystery Tour hippy stage of the late Sixties using hallucinogenic and psychedelic designs to represent The Beatles’ increasing experimentation with substances and eastern theory through to songs from the White Album.

The set undergoes several changes to resemble the various venues the Beatles played. The Cavern Club, is created through clever projection and lighting, transforming quickly into the London Palladium stage, before later becoming a stadium complete with crowd.

Although we know we’re watching impersonators, there are moments when we get a sense of what it might have been like to see the group live, feel the atmosphere and enjoy music in the company of a mass of people who share the same enthusiasm for the songs. That owes a lot to the talent and charisma of the performers. The vocals and musicianship are good and the sound is similar, close your eyes and at times you could be fooled, though some performances were stronger than others.

Emanuele Angeletti is an uncanny Paul down to the cheery smiles and bobbing head-movements, while John Brosnan mimics the shy, understated George. Luke Roberts’s Ringo cheerfully drums away at the back, at times adding comedic value and Paul Canning’s reminds you just how cool John really was. Maybe it’s down to my own musical taste, but the show seemed to get stronger as it progressed through the years.

It doesn’t go down in my book of classic musicals. I’m too young for it to be nostalgia but regardless of whether you’re a die-hard Beatles fan or like me, you just appreciate good music, this two-hour hit marathon is a great ticket to ride for a fun night out.

Let it Be is showing at the Royal Concert Hall until 9th July, with matinee and evening performances. Tickets from £16 available at

Theatre Review: Crazy For You – The Theatre Royal Nottingham