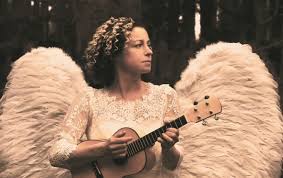 Charles Dickens, that godfather of Christmas, with his festive traditions of tree, decorations and of course turkey.

Besides this classic Christmas, modern traditions now include scoffing a whole tin of Quality Street whilst watching Die Hard on the television. One tradition that has been occurring in Nottingham for the past ten years is a visit by Barnsley born folk songstress Kate Rusby and her festive songbook.

I first came across Kate’s music in 2002, when an ex-girlfriend took me to see her at Hebden Bridge in West Yorkshire. I knew then that Kate, with her tender vocals and wild curly hair was someone special, and so have been a fan ever since.

Kate was born into a musical family, and after a stint with folk band The Poozies, launched her first album with fellow Barnsley singer Kathryn Roberts in 1995. Her first solo album ‘Hourglass’ appeared in 1997, with her seventeenth ‘Angels and Men’ last year.  Her short Christmas tours began in 2008 with the release of the Christmas album ‘Sweet Bells’. These gigs used to be staged at Nottingham Playhouse. But with her ever increasing fan base, she transferred to the Royal Concert Hall a few years ago, and tonight was the last of this year’s 14-date tour. 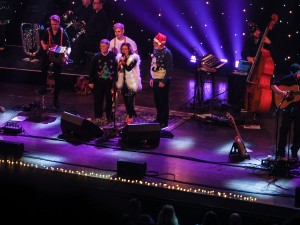 Amongst the songs that Kate performed in the first half was one of three versions of ‘While Shepherds Watched Their Flocks By Night’. According to Kate, there are at least thirty versions of the song. This one had been renamed Cranbrook, and went to the tune of that Yorkshire favourite, ‘Ilkley Moor’.

One thing that I, and many others enjoy at her concerts, besides the music of course, is Kate’s chatter. She really engages with her audience with anecdotes about her life, her family, touring and of course her beloved Yorkshire. In fact she nearly talks as much at her gigs as she sings. But it’s always interesting and often very funny.

Tonight she introduced Ruby the Reindeer, or Ruby Tuesday, as the band call her. Not a real reindeer of course, but a large animated Christmas decoration. Kate said that it was Ruby 2, as Ruby 1 had been knocked off the stage in Hull, and so is now retired and eating carrots in a field near her house.

Kate also mentioned that is was Dave Catley, their lighting guy’s 40th birthday. He was then presented with a massive My Little Pony shaped balloon. She then introduced her band, which this year included a percussionist called Evan Carson. Kate is married to band member Damien O’Kane, with whom they have two children together, nine year old Daisy Delia and Phoebe, who’s six. 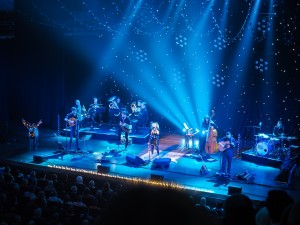 Part two, began with a slightly melancholy Christmas song ‘Paradise’. But the next one was an uplifting composition called ‘Santa Never Brings Me a Banjo’, written by roots musician David Myles. Then came ‘The Frost is All Over’. Inspired by walking her dog around the village where Kate lives. She then left the stage to the boys for some “manly music” as she calls it. This consisted of tunes written by the individual members of the band and lasted for around ten minutes. Back on stage, Kate modeled her new faux fur gilet, as she was feeling a tad chilly. The lights then dimmed and the jacket lit up like a Christmas tree, to the great delight of the audience. Next came ‘Joy to the World’ backed by the theme to Miami Vice. A shame that Kate’s gilet didn’t have sleeves, otherwise she could have rolled them up like Crockett did.

As the concert came to an end, Kate’s parents Steve and Ann joined her on stage to sing with the third and final version of ‘While Shepherds Watched’ called Sweet Bells. A great way to end the show, and one which took us, right back to the origin of her delightful Christmas tours.