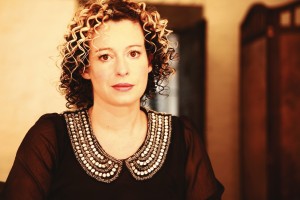 Another practically full house welcomed Kate Rusby to the stage at Nottingham’s Royal Concert Hall for her traditional Christmas tour. And it’s now traditional for my wife and I to go and see her sing variations of traditional carols, plus songs that she had written herself about this time of year, as we have done for umpteen years now.

Kate Rusby hails from Barnsley in South Yorkshire and has been a regular on the folk scene now for well over 20 years, and has created some 18 albums. Five of which are all about Christmas. Besides her exquisite singing voice, it’s her humour and story telling that endears to her faithful fans. She asked the attentive audience if they had got their festive edition of the Radio Times yet. She had, and they all like to read it whilst travelling on the tour bus. It’s little snippets like that, that make her shows so special and so personal.

Practically every year there’s some alteration to the band. Whether it is a change of musician, or the introduction of a new instrument. A couple of years ago, the ‘Festive Moog’ appeared on stage for the first time. A synthesiser in a folk band, sacrilege. Kate goes prog? Well of course not, it is used vary sparingly, and only as part of the melody, not a replacement. This year saw the reappearance of the drummer, but this time its in the form of Jos Clark. And of course the ‘Brass Boys’ were of course there, to re-enforce the Yorkshireness of the singer and a welcome return of Doris 2, an animated reindeer..

This year we also found out that Ms Rusby loves hippopotamuses, and showed us a small collection that she had gained from her winter tour, by fans that had left them for her. One fan had even knitted her a wooly hat that looked like a Christmas pudding. Kate of course had a song to go with her growing collection of water beasts entitled ‘I Want a Hippopotamus for Christmas’, which was originally sung by 10 year old Gayla Peevey in 1953. 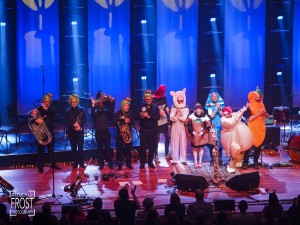 But the more traditional Christmas carols prevailed, including three versions of ‘While Shepherds Watched’. These mainly use the original tune, but with different, and additional lyrics. Kate explained that songs like these originate from villages across Yorkshire, where in local pubs they would have singing and people would create their own versions. A similar thing happens in Cornwall. And Kate introduced us to a Cornish version of ‘I Saw Three Ships’ called ‘Sunny Bank’.

In total, Kate sang about 15 songs, and to give her voice a rest, we were entertained by three members of the band including her husband Damien O’Kane, who gave us a medley of tunes interspersed with Christmas pop tunes, which Damien started with a fair rendition of East 17’s ‘Stay Another Day’ but without the Artic coats and fake snow.

Once a year Kate organises a music festival in Barnsley that’s called ‘Underneath the Stars’. Kate said that Suzanne Vega was appearing next year, and that she had better sing her most famous song ‘Marlene on the Wall’, otherwise she jokingly said that she would have to kick her head in! 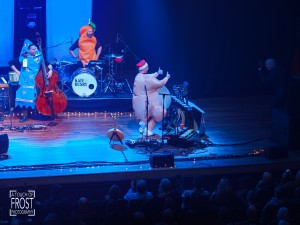 Besides the music of course, the highlight of the evening was when everyone came on the stage dressed as something associated with Christmas. Kate was a pudding, then there was a cracker, a carrot, a pig in a blanket and the brass band came on as frog princes. Damien did the ‘walk of shame’, as he came on as a turkey. He struggled a bit with trying to put on his guitar over the very large plastic costume. Something  of course the audience found hilarious

It was a fantastic evening, and was for me, now officially Christmas.