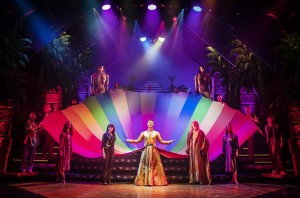 Almost everybody knows “Joseph and the Amazing Technicolor Dreamcoat” in some form. It’s well-known songs are the darling of School Choirs and Holiday Parks across the country and this week the dazzling touring production arrived at Nottingham’s Theatre Royal.
I’ve seen various productions over the years and on the whole it doesn’t change much but then again why change a winning format.  The costumes have gotten better and the choreography bought up to date but thankfully it’s not been messed with, nor should it.
This Bill Kenwright production begins with an orchestral medley, which whilst slightly lengthy, serves as a reminder of just how many of the iconic numbers in musical history you actually know and has the audience singing and clapping along before a performer has even taken to the stage.  Once we’re thoroughly warmed up, the show begins with the narrator explaining to the story touchingly to the children.  Is it just me that although based on the biblical story, thinks that the whole show could be a metaphor for believing in your own dreams?  It could be a tough road, but they’re worth following.  Get my drift? Of course the story remains relevant to today in terms of family tensions and bullying too. 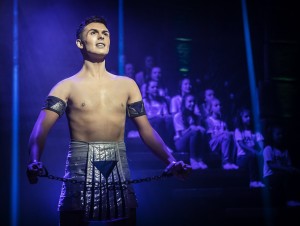 The curtains lift to reveal the rest of the cast in full technicolor glory in a scene somehow reminiscent of a magical Nativity as they launch into Jacobs and Sons/Joseph’s Coat.  Union J’s Jaymi Hensley  is a fantastic Joseph, delivering the numbers with the feeling and emotion they deserve, dazzling particularly in the heart wrenching  ‘Close Every Door To Me’. Often with shows you find a name appearing to sell tickets but Jaymi gives a superb performance. His energy bringing fresh life to the character proving he more than deserves the role, putting any doubters at bay as soon as he opens his mouth. His vocal range is impressive with perfect diction and he has mastered the comedy timing. A career in the West End looks definitely on the cards for the young performer. The real star of the show for me, I always feel, is the Narrator.
In a week where the London Productions Narrator, Sheridan Smith, has allegedly not had her contract renewed for shouting at the kids (tabloid, so believe what you will), in her first professional role, Alexandra Doar, bought warmth and charm to what is a difficult and demanding role and could fit nicely in to those empty shoes in London. There’s some tough high notes in there that make your throat hurt just thinking about them and a lot of repetition musically which demands focus and professionalism which Alexandra bought to the stage in abundance. 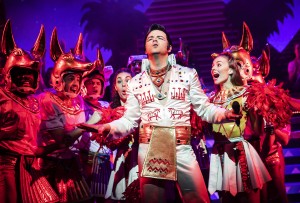 Supporting are a sassy talented bunch who deliver each number with energy and wit . Andrew Geater who works his socks off playing two roles, Asher and the Elvis styled Pharaoh deserves special mention not only for that but for carrying on when there was a shout of ‘First Aider’ from the audience  and the commotion which followed.  The show must go on as they say, and he managed to maintain a flawless performance throughout.
Our story follows Joseph, favourite son of Jacob, whose eleven bitter brothers sell him as a slave due to their jealousy of Joseph receiving a technicolor coat from their father. Joseph has to battle for his freedom against the odds and proving that dreams really can come true.

There’s really nothing not to like about this witty ultimate feel good show which to be honest is a credit to legendary writers Tim Rice and Andrew Lloyd Webber.  No wonder it’s toured for the best part of fifty years. Long may this beautiful, sweet, technicolor dream continue.
By Tanya Louise
Editor
Visit My Blog
Visit My YouTube Channel
Find Me On:
Twitter Instagram and Facebook
Share this content....