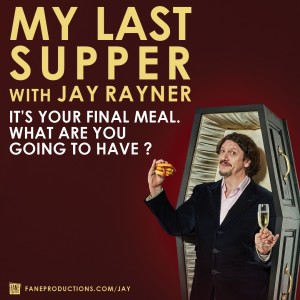 It’s a Sunday night in Nottingham and we’re dealing with the important issue of your last meal on this earth!

It’s the question award-winning restaurant critic, MasterChef judge and writer Jay Rayner has been asked most often by audiences across the UK.  It’s also a question we’ve all probably thought about at some point too, though would I really enjoy tucking into a Bailey’s infused croquembouche knowing I was about to meet my maker?

To ponder the answer Rayner brings his one man show, My Last Supper, to The Glee Club Nottingham following the success of his sell out shows, My Dining Hell and The Ten Food Commandments, which have taken audiences by storm across the UK, Australia, New Zealand and the US. A comedy club might not be the first place you expect to see a restaurant critic but as we await his arrival on stage classic 80’s music plays. It can’t be a coincidence that the final track before he appears is ‘Hungry Eyes’? Spoiler – This might just give an indication of the dry wit ahead.

Many books have been written on the subject, Rayner’s most recent one too (available now in all good book shops) such is the intriguing concept of the last supper. Would it be something extravagant that lets our imagine and appetites run riot? something down right weird such as the testicles of a blow fish? or just good old spoon in the Nutella comfort eating.

The fact is what you choose as your last meal more likely expresses who you are. So, how would Rayner who has for two decades made a living eating out in restaurants, choose what would be on his menu? what follows are his choices intertwined with anecdotes and stories about his life, how he was introduced to oysters by his late mother, how he almost burnt down a hotel because of his love for snails in bubbling garlic butter and of the many ways by which the mighty pig has fed him over the years.

There’s plenty of audience participation too.  The first half of the show ends leaving the audience (which includes Michelin starred Chef Sat Bains) to guess what’s under the final cloche on Jays menu, with us tweeting our guesses to prolific Twitter Jay during the interval.  We are also invited to share our last suppers, with the good folk of Notts including Gingsters Pasties, Pies and Frazzles. Top marks to our pals at LeftLion who devised a final supper menu full of Notts independents including Goose Fair mushy peas, batter bits from The Cods Scollops, the Elvis burger from Annie’s and crab sticks from the cockle man.

The evening ends with a Q & A thankfully before the wine ends some of the louder audience members, who Rayner is able to thankfully stop in their tracks with a witty retort. Many questions are about the technicalities of Masterchef, general foodie related issues and of course the current whereabouts of a wooden penis sent to his late Mother.

Food, we learn, is the punch lines to anecdotes, the endings to stories and what you eat actually says a lot about who you are and how you identify with food.  I should probably remember this when I’m sat on the kitchen floor eating grated cheese out of the bag with a spoon.

Review: Let It Be