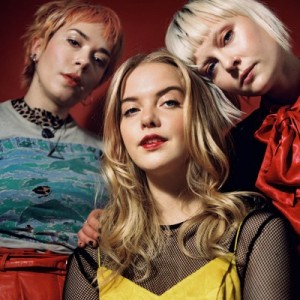 Defiance and calls for inclusion. A lesson in earned self assurance.

We’re just done po-going through the pink leopard printed glammed-up slam-pulp of Queen Zee. Their neons and whites, their lipstick and eye shadow, their over indulgence, exuberance and heat leaves a flicked glitter stain on the stage. Overcrude overdrive, thrill switch engaged, over the top served from under the counter. They got the crowd twisting to a hacksaw sharp set where the too-straight-to-twirls and the twisters divided, they sang “sick to my dick” like a love song. A soundtrack to back-alley valentines.

I’m just done digesting when new drums and faces beam out to the crowd, Dream Wife are the top billed attraction. A slick speed and tease through smoothed off rough rhythms, clear and concise and perfected. They’ve toured heavy in 2018, a stream of EPs since 2016 have led up to this year’s debut album. By end of this year Dream Wife will have played 115 UK and EU dates. So they’re practiced, they’re sleek, they’re high on the ride off the back of hard work. They’re precisely sculpted and shaped. They’re also incredibly young. Politicised, ideals and all.

I’ve heard it said sometime on Radio 6 that Dream Wife are bringing punk back for women, as the set moves on, one sharpened song at time, I won’t contest or counter that claim. There’s defiance and calls for inclusion. “I am not my body / I am somebody” clings to riot tinged pop with a bubblegum screech. There’s the sass and the play in their name, their currency trades against cute, coy and gutsy. But for all the calls for “bad bitches” to join them, I’m still looking for something with teeth.

The sound and the show pleases easily, a finely hung crunch rings and thumps on throughout, never moving too far from control. Each track wraps around me, engages and commands, each a lesson in earned self assurance. We clasp at the hands of less subtle acts around riot girl, art punk and grunge. Ownership, gender roles, self identification, it’s all up for grabs and discussion

Quick fire wins and sharp pricked kicks, it’s contagious while wrapped in the evening. But for all the staunch role play and protest promotion, I feel safer than I should be feeling.