I pity kids today.  They’ll never know what is was like to grow up in the 80’s

It was the era of New Romantics and glamour, when you got dressed up to go clubbing (yes, that includes you fellas – you wouldn’t be let in some places without a tie! Remember that?) It was more of an event.  Pubs closed earlier and nightclubs were THE place to continue your night. You went to dance and feel alive.

Realising that there’s nothing like this anymore, especially for the age group that lived it, is ex -record industry executive Simon Stanford who has founded Disco For Grown Ups, exclusive pop up parties for ‘grown-ups’ who love to boogie the night away, and I was invited along the experience at The Embankment Pub at Trent Bridge in Nottingham.

As we arrive there has just been a power cut in the historic 1920s Lord Trent ballroom, caused apparently by a smoke machine.  They apologise but boy, you couldn’t make that kind of nostalgia up could you?  – something that would typically happen at a disco in the 80’s.  My first experience of a disco was at the local community centre, it was like one of those mobile classrooms. It shook as you danced. The DJ obviously played vinyl (as they did tonight) because that’s all there was, so the track Boxer Beat could last anywhere from a few seconds to 10 minutes on a good day as the needle jumped around the record as we stamped our feet to the beat. 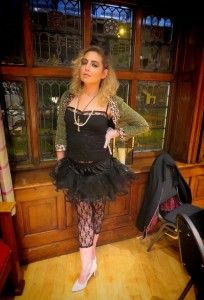 Ten minutes later thanks to an extension lead and some heavy duty gaffer tape and we’re back in business. Disco and feel good classics from the 70s and 80s fill our ears and our souls and good old disco lights and effects flash before our eyes.  You don’t have to dress up, though 70’s glam and 80’s style is encouraged and so folks dressed as Madonna, Wham, Jason Donovan all dance happily together like no one is watching and to be fair we aren’t, we’re all just dancing, forgetting our troubles and having one hell of a good time at a safe, fun night out.

Classic followed classic Bronski Beat, Simply Red, Cyndi Lauper, Flashdance, The Weather Girls, Gloria Gaynor, ABBA, Sister Sledge, Diana Ross, Erasure, Earth Wind and Fire, Donna Summer, Chaka Khan, Depeche Mode, Prince, Candi Staton, Whitney, Rose Royce, the list goes on.  We sit on the floor for Oops Upside Your Head like its the most natural thing in the world (OK, maybe it’s harder to get up nowadays)  I’d say the 80’s sounds outweigh the 70’s. I’m happy with that and the crowd seemto be too as we boogie into midnight.

You can’t bottle that feeling of nostalgia and your long lost youth when you danced like you had your whole life ahead of you, so do the next best thing and get yourself to the next Disco For Grown ups.

There was such a huge demand for tickets for this event that two more pop-up discos have already been announced for November including the companies first and biggest ever disco in Nottingham city centre, so make sure you snap up your tickets quickly.