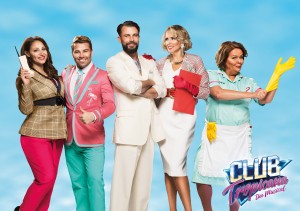 I love the 80’s, they were simpler times in many ways, yet everything was OTT.
The new romantic era, leotards and curly perms.  It was loud, proud and fluorescent, a lot like Club Tropicana The Musical, a nostalgic blast from the past which makes you yearn for more of it’s seaside humour and a time when fart gags were funny.
Set primarily in a Spanish hotel, booking a weeks accommodation at the Theatre Royal Nottingham, the show is practically a must for over 40’s and indeed any lovers of iconic 80’s music. The plot is a tad predictable, but its all done with so much outrageous fun and exuberance that it’s entirely forgivable.  Camper than a row of pink tents, the humour is harmless, if not a little dated but typical of the big variety or end of pier performances of the time. The emphasis is more on the comedy than the story itself, with long-suffering cleaning lady Consuela (Kate Robbins) providing much of the visual slapstick
Falling into the ‘juke box musical’ category, it has to be said Club Tropicana is one of the better ones out there and this is thanks mainly to it’s superb soundtrack – the real star of the show, whose titles and lyrics are woven into a narrative by writer Michael Gyngell and performed live on stage by the band who do well to emulate that 80’s sound.

Our story of sun, sea and sangria begins on Lorraine and Ollys wedding day – Cue ‘Fantastic Day’. Having a change of heart, ‘Don’t Leave Me This Way’, Lorraine (Karina Hind)  and her friends decide to escape from it all by going on the non-refundable honeymoon together.  Meanwhile, Olly (Cellen Chugg Jones) and co also decide that a holiday is in order. What are the chances of them all ending up at Club Tropicana? Of course they do. Here, along with the back-combed hair, shoulder pads and power suits, we follow another will-they-won’t they relationship between hotel managers Robert (Neil McDermott) and Serena (Ex Suga Babe Amelle Berrabah) with the interference of ‘hotel inspector’ Christine (Emily Tierney).  Leading the cast and holding it all together is hotel Entertainments Manager Gary (X-Factor’s Joe McElderry) with a great voice, excellent comic timing and audience interaction. Nobody in this production takes themselves too seriously but this talented cast, work their socks off throughout to deliver high energy choreography and cracking vocals.
Weirdly enough, Club Tropicana is never actually sang, though it’s often pointed out that drinks are free – “well your first one anyway’ One thing they haven’t resurrected is the 80’s sexism.  Keep a look out for their version of 1981 Eurovision Song contest winning ‘Making Your Mind Up’. Musical highlights for are Yazoo’s poignant ‘Only You’ and a note perfect  A-ha’s “Take On Me’
You’d be hard pushed to find anything quite like Club Tropicana. It’s not a masterpiece but has a certain cheesily addictive feel-good factor that just makes you want more and more.  Make sure you don’t miss out on the party and make your reservation today!