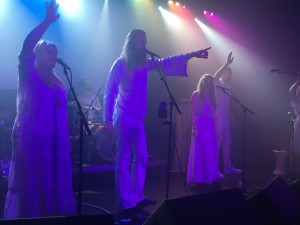 For a long time psychedelia was a dirty word in music – throughout the 90’s and the 00’s, only really The Flaming Lips and the Super Furry Animals really kept the fire burning. Recently, the genre has had a huge resurgence. Antipodean bands Tame Impala and King Gizzard & The Lizard Wizard have been at the forefront of this movement and Beyond The Wizard’s Sleeve from Britain released their debut album this year. 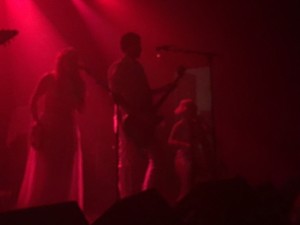 Now it’s Nottingham’s turn to get in on the act. Church Of The Cosmic Skull are part seven-piece band, part new religious movement, who want to free mankind from their material possessions and unify all living beings into a singular cosmic whole. They start their mission with their first ever gig which is held at The Rescue Rooms and doubles as a launch party for their debut album, “Is Satan Real?” 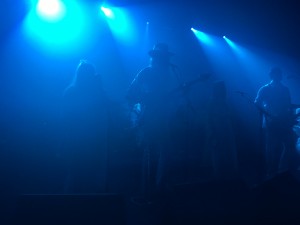 Following two support bands, Prophets Of Saturn and Crumbling Ghost, who come straight out of 70’s central casting, Church Of The Cosmic Skull arrive on stage all in white, like a cross between The Polyphonic Spree and the Droogs from A Clockwork Orange. The lead singer/guitarist is tall and thin with long hair and a hat, all of which combines to give him a faintly Mick Fleetwood-esque appearance. He’s flanked by a pair of female backing singers, a bassist, an electric cellist, a Hammond organ player and a drummer behind him. 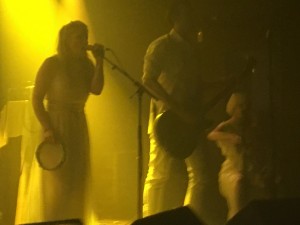 Musically, they have that 1970’s heavy psych sound, a little like Hawkwind, and they sound absolutely fantastic. While they’re heavy, they’re not really heavy but they do have a real depth of sound that the Hammond organ, the electric cello and the six-part vocal harmonies all contribute to. They also have an absolutely stunning light show – for a debut gig it’s a tremendous performance. 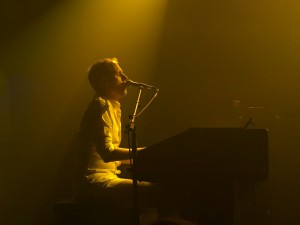 In between songs, there is very little interaction with the audience. Instead, there is a projector showing phrases that emphasise the band’s designs on being a religious movement. We’re told about “freedom”, “facing mistakes” and the “hallucinatory reality of nature”. Maybe I’m the only one who sees the irony in a band trying to free mankind from material possessions at the same time as trying to sell their new album. 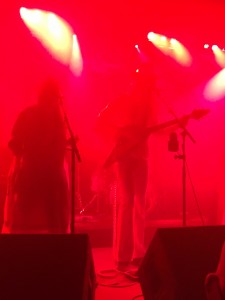 As with all psychedelic bands, a couple of their songs meander a little, but that could just be my punk sensibilities showing. It does feel like I was at the beginning of something genuinely different for Nottingham and something that was incredibly exciting. I can’t wait to see what Church Of The Cosmic Skull do next and where they could take this. Whatever they do, it should be exhilarating.