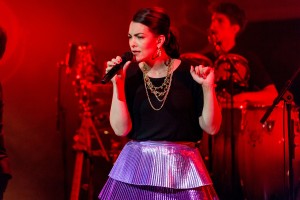 As this was the Dutch multi-platinum selling artists fourth visit to the Royal Concert Hall in Nottingham, and my third time reviewing the pop and jazz singer, you have an idea what to expect from Ms. Emerald.
And she doesn’t disappoint.  I’d say more polished than ‘Shocking’, to reference her second studio album, but nevertheless, it’s an evening of feel good, infectious music. 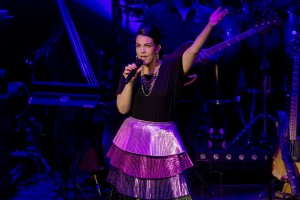 Her stage back drop, as per, is colourful and almost tropical, reminding me how badly I need a holiday. Not surprising then that the opening number of the evening is Riviera Life.  Everything is quite laid back about this gig and seems more so then previous tours. The music is still as timeless as it is fantastic but the set seems slower paced.  Despite possessing an incredible vocal range, Caro has never been one for vocal acrobatics, unless you count her own version of skat, but her rich sultry velvety voice makes each number seem effortless.  The tempo though definitely seems more pool than party, right up until the last few numbers when she has the crowd out of their seats and eating out of her hand. I’m pretty sure she’s flipped the running order. 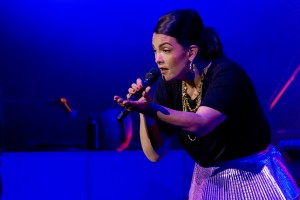 Played live, an infectious blend of electrifying electro-swing, salsa, jazz, pop, Caribbean and Latin American influences are mixed in with a good dollop of sampling to keep the mood light-hearted. The band gel well together and as well as being tight. They participate in some pretty nifty foot work,
I look forward to hearing more new music from Cara, whose debut album Deleted Scenes From the Cutting Room Floor spent more weeks in the Dutch album charts than Michael Jackson’s Thriller. Her second The Shocking Miss Emerald, stayed in the charts for an entire year. She certainly had no problem entertaining young and old in the audience at Nottingham.
By Tanya Louise
Editor
@tanyalouise_
tanyalouise.net
Photos by Andy Tattershall