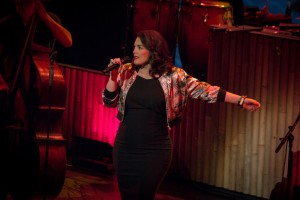 Tonight is a special night, not only is it the Dutch multi-platinum selling artists third visit to the Royal Concert hall, but it is also her 36th birthday, and what better way to celebrate than with an evening full of fabulous feel good music and an adoring crowd.

Taking to the stage, Caro dressed in a vintage black dress with gold bomber jacket, accompanied by her seven-piece band, kicks of the performance with some of her best loved hits, Riviera Life, Back it Up, Tangled up, The Maestro, Stuck and Dr Wanna Do.  Heavily pregnant and yet still appearing lighter on her feet than I could ever dream of. 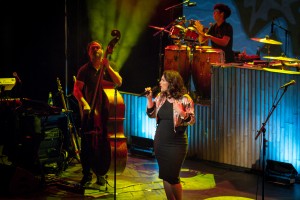 Emerald is one of the post-Winehouse retro jazz/soul vocalists.  She doesn’t have, say the same torment to her voice, however, what she does posses is an incredible range, a sultry velvety smooth vocal and a wicked sense of humour, which along with boundless energy and a polished pop performance earn her a place in the up-beat jazz genre, perhaps one of it’s easier listening protagonists.

An infectious blend of electrifying electro-swing, salsa, jazz, pop, Caribbean and Latin American influences are mixed in with a good dollop of sampling to keep the mood light-hearted. The band, not only participate in some pretty nifty foot work, but with a pair of drum sticks, even manage to turn the set into a musical instrument.

A short musical interlude with her talented band and she’s back with a change of outfit and flower in her hair, for a more sultry section of the evening. performing Tahitian Skies, from her latest EP, Emerald Island, The Ghost of you, Quicksand and Never Ever.  Music you could imagine playing as you lay somewhere warm and exotic by a pool. 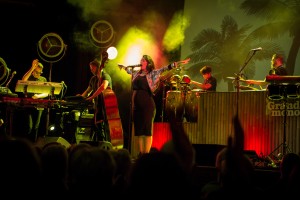 The EP is her first long play release since 2013. Her debut album Deleted Scenes From the Cutting Room Floor spent more weeks in the Dutch album charts than Michael Jackson’s Thriller. Her second The Shocking Miss Emerald, stayed in the charts for an entire year.

A further short musical interlude, a costume change and we’re back.  The big screen behind, which throughout has shown graphics of the Emerald Island, palm trees and so forth, now welcomes us to the Emerald Bar and Club ‘Where dancing is allowed’ Caro reminds us, and it’s not long before the audience is up on there feet for Just One Dance, Liquid Lunch and That Man 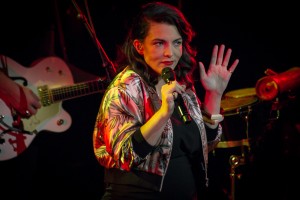 The audience eating out of her hand, rapturous applause ensure an encore follows as we’re treated to a haunting cover of the classic Nat King Cole/David Bowie Nature Boy before the fun continues with A Night Like This and her latest release Whatchugot

Birthday celebrations continue throughout the night as the band give out 36 presents, including signed memorabilia to lucky audience members. Amongst them Caro tells us is a 96 year old, probably the oldest person she’s had at a gig she thinks.  Looking around the audience I also spot a baby on someones knee, proving her fantastic music spans all ages.

The Ghost of You

You Don’t Love Me