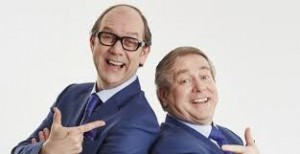 79 years ago two young entertainers, John Eric Morecambe and Ernest Wiseman, met by chance at the Nottingham Empire Theatre.  It was a friendship which would last until Morecambe’s death in 1984
Little would they have known that almost in the same spot, at the Theatre Royal Nottingham, all these years later, that audiences would still be laughing at the same material which made them one of the most iconic, best-loved comedy double acts that Britain has ever produced.
The tribute act to Morecambe and Wise, evolved out of the play Eric And Little Ern and is the brainchild of actors Ian Ashpitel (Ern) and Jonty Stephens (Eric). Looking and sounding just like the comedy duo, it is almost the live performance I never thought I’d get to see.

Morecambe and Wise are such a British institution that, get this, I had to initially google them to establish if they were around in my time or if I’d become so used to watching reruns and Christmas specials that I’d just assumed they were.  Turns out it was a bit of both.  If you scan around the Christmas TV Schedule then you’ll still find them there, probably because of tradition and an overwhelming, nostalgic yearning for simpler times. Also because, as it turns out, their humour is absolutely timeless.
I hadn’t expected to actually laugh out loud at An Evening with Eric and Ern, people who know me will realise it takes a lot for me to even break into a smile sometimes and yet I, along with a packed theatre, laughed from start to finish for almost two hours.
Set before that familiar red curtain, the stage has only a baby grand piano and a phone..  The size of the stage at the Theatre Royal suits the production perfectly and reimagined the images we saw on the TV.
What follows is an evening of routines from the television show.  It largely concentrates on the material used to link the various sketches together and at times you feel you’re waiting for a sketch, but this is Morecambe and Wise stripped back to basics – a pair of friends bantering with added gags. We already know whats going to happen in most or we can guess the punchline, but the delivery is so spot on that you can’t help but get caught up in the general silliness.  Thankfully the audience were well-behaved and didn’t shout out the punch lines (with the exception of ‘Arsenal’  – If you know you know -) although no doubt the duo would have had an in character retort – and I liked that.  The joy of Morecambe and Wise is that it always appeared ad-libbed even if it wasn’t.  If my memory serves me rightly, it was when they worked with other script writers that the magic wasn’t there. Old favourites such as Mr Memory, the André Previn sketch and the hilarious ventriloquist dummy, plus in-character exchanges with the audience in classic Morecambe and Wise style had the audience in hysterics throughout.
Vocalist Rebecca Neale stands in place of the guests on the show.  You just know her rendition of Send in the Clowns is not going to go smoothly as the two literally clown around behind her.

It’s obvious Ashpitel and Stephens have studied the pair in intricate detail.  The movements, the vocal intonations, little nuances that make them look and sound so much like the duo it’s so uncanny that you often have to remind yourself that you’re not watching the real thing.  True professionals like the gentlemen they are portraying, not once are they out of character, achieving complete authenticity.
Ending ,as they had to really, on Bring me Sunshine, I’d recommend anyone go and see this show if you get the chance. Morecambe and Wise gags are for life – not just for Christmas