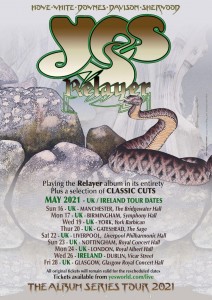 13th May 2020: YES announce re-scheduled UK & Eire dates, due to the coronavirus pandemic, for The Album Series 2021 Tour. The tour was originally scheduled to kick off this month in Liverpool – it will now begin on 16th May 2021 in Manchester. The show will feature their 1974 Relayeralbum in its entirety together with a selection of other classic YES favourites. YES recently announced re-scheduled European dates and are looking forward to returning to live shows.
“Many things have changed in the world these past few months. My appreciation for the freedoms we’ve enjoyed in the past has grown along with my gratitude for all the people caring for humanity throughout the world.”
“I can’t wait to be on stage again in front of real audiences playing ‘YES’ music. I’m hoping we can bring some joy and positivity back into our lives.”
“Please take care and stay safe, we want to see our many fans and friends again in 2021!” Sincerely, Alan White
The tour line-up features Steve Howe (guitars), Alan White (drums), Geoff Downes (keyboards), Jon Davison (vocals), Billy Sherwood (bass guitar and backing vocals) and Jay Schellen (additional drums and percussion).
The show will comprise two sets by the band with full production and a high definition video wall. The first will feature favourite classic tracks from YES’extensive catalogue. The second will feature Relayer, the seventh studio album by YES, and one of the band’s most distinctive. Relayer marked a slight change in direction as Patrick Moraz replaced Rick Wakeman on keyboards bringing an edgier, avant-garde feel to the album. This was perfect for the opening track Gates Of Delirium, almost 22 minutes in length, with its battle scene featuring the keyboard of Moraz and Steve Howe’s guitar. The battle gives way to the beautiful closing ballad Soon, a prayer for peace and hope.
The album continues with Sound Chaser, a prog-rock-jazz fusion experiment heavily influenced by Moraz’s style and To Be Over, a calm and gentle conclusion to the album, based on a melody by Steve Howe.
Released in late 1974 on Atlantic Records, Relayer continued YES’ success reaching number 4 in the UK album chart and number 5 in the US Billboard chart
Re-Scheduled UK & Eire Dates for 2021
THE ALBUM SERIES RELAYER Tour are:
MAY
Sun 16th May Manchester Bridgewater Hall
Mon 17th May Birmingham Symphony Hall
Wed 19th May York Barbican
Thurs 20th May Gateshead Sage
Sat 22nd May Liverpool Philharmonic Hall
Sun 23rd May Nottingham Royal Concert Hall
Mon 24th May London Royal Albert Hall
Wed 25th May Dublin Vicar St.
Fri 28th May Glasgow Royal Concert Hall
All tickets remain valid for the re-scheduled shows.
For full details and to book tickets for all shows
Please go to bookingsdirect.com for UK
aikenpromotion.com for IE,
or yesworld.com for all dates and meet and greets with the band.
About YES
Steve Howe: guitars, backing vocals (1970 –1981, 1990–1992, 1995–present)
Alan White: drums, percussion (1972 – present)
Geoff Downes: keyboards (1980–1981, 2011–present)
Jon Davison: lead vocals, acoustic guitar (2012–present)
Billy Sherwood: guitar, backing vocals ((1994, 1997–2000), bass guitar, backing vocals (2015–present)
Formed in 1968 by Jon Anderson and the late, and much-missed, Chris Squire, YES have been one of the most innovative, influential and best-loved bands in rock music history. Their 1970s albums The Yes Album, Fragile, Close To The Edge, Yessongs (a triple live album set), Tales From Topographic Oceans, Relayer and Going For The One were ground-breaking in musical style and content. Their music also became synonymous with artist Roger Dean whose distinctive YES logo design and artwork adorned the lavish gatefold presentation sleeves of many YES albums.
With sales of over 50 million records, the Grammy-award winning YES were inducted into The Rock And Roll Hall Of Fame in 2017 where they performed Roundabout from the album Fragile and the FM radio-friendly Owner Of A Lonely Heart from the 1985 album 90125.
www.yesworld.com
www.facebook.com/yestheband
www.twitter.com/yesofficial
www.youtube.com/user/yesofficial
www.instagram.com/yesofficial