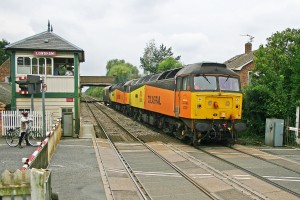 The signal box became redundant in 2016 along with others in the East Midlands area, following the re-signalling of the Nottingham and Lincoln line.

Rather than see the signal box become dilapidated with no public access, Lowdham Railway Heritage founder and local enthusiast, David Moore, decided to submit planning permission to move it to a suitable location still close to Lowdham train station, restore it to its original condition and open it up to the public as a small signalling museum. 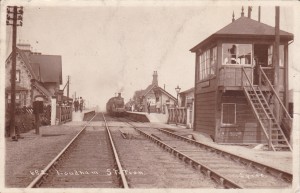 Nottingham-based HWA supplied much of the engineering work required to move the signal box on a pro bono basis, including determining how the box could be lifted without damage, as well as advising on the best place for the crane to operate. The engineers also designed the steel frame used to support the box and connect it to the crane hook, ensuring the structure would be secure while being lifted in one piece.

The move, which took place overnight (24 October) to avoid scheduled trains running through the Grade II listed railway station during the day, was a success and the signal box is now situated in an old cattle dock behind the station, approximately 6ft from the train tracks.

Signal boxes have a rich history along Britain’s railway lines, first appearing in the 1860s at stations, level crossings, junctions and goods yards as a way of ensuring that a safe interval of space was left between trains travelling along the same track. Many companies and stations had their own designs and liveries, giving rise to some of the charming colour schemes we associate with signal boxes, such as green and cream and yellow and maroon.

There were once as many as 10,000 signal boxes used in Britain, with many now replaced by computerised centres controlling large sections of the rail network.

Thanks to a host of volunteers and professionals, the Lowdham signal box has been stripped and will be restored and repainted in a tradition colour scheme to reflect its original condition. The interior will also be refitted, complete with polished wooden block instruments, a gate wheel and new staircase, to create a simulation for visitors to experience how the Victorian signal box would have operated during its working years.

With help from local volunteers, the plan is to welcome members of the public to visit the signal box during selected open days.

Giles Ward, director at HWA, said: “We were pleased to offer our expertise and services on this interesting heritage project, which sees an important piece of railway history preserved for the public to experience and enjoy. Signal boxes have become an iconic and charming symbol of Britain’s railways over the years and it would have been a shame to see another disappear.

“As a Nottingham-based company, we are always keen to get involved in projects that boost the local community.”

David Moore, Lowdham Railway Heritage founder, said: “Moving the signal box was a huge success and it is wonderful to see it in its new location, ready for further restoration and repainting.

“We are grateful to HWA for its work and professional advice in planning the move, and to all of our volunteers for their assistance in making this happen.

“We look forward to progressing our restoration plans and to welcoming members of the public to visit the signal box in the near future.”

From its head office in Radcliffe on Trent, Nottingham, HWA delivers construction engineering consultancy services across a range of sectors, including education, healthcare, emergency services, commercial and residential across the country.