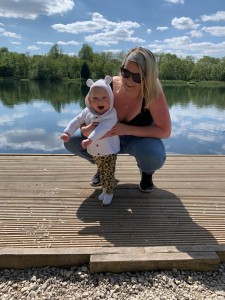 Hear from the Fisher family who share their son’s story

Footprints CEC (conductive education centre) has been a lifeline for families of disabled children in the East Midlands and beyond for almost 40 years. Now, it battles to stay afloat after experiencing a 40% funding loss since the coronavirus pandemic began.

The education centre provides weekly sessions for families of children with mobility or communication difficulties across the East Midlands, teaching them everyday life skills that are often taken for granted such as eating and walking.

One family who has been touched by the Nottingham-based charity’s services is the family of 19-month old Jesse who has a number of health conditions which affect his development.

Mum Beth Fisher had been attending Footprints’ conductive education centre with Jesse for nearly a year when the pandemic forced its closure.

Jesse was born prematurely at 31 weeks, and as result was very ill when he was born, having a collapsed lung at one day old. When he was just three and a half weeks old, his family were told he had severe bilateral brain damage/Periventricular leukomalacia (PVL) – which is a type of brain injury, most common in premature babies, that causes damage to the white matter of the brain. They were told before birth and in the first few days he might not survive, but he continued to go from strength to strength and was discharged after spending the first four weeks of his life in hospital.

Doctors said that Jesse was likely to have a number of physical and learning difficulties and may have epilepsy. It was also said to be likely he would have cerebral palsy, and he has recently been formally diagnosed with the condition which affects his movement, coordination and sight.

Jesse’s development is delayed, and he is just learning to sit on his own at 19 months – something that is often done by babies between six to eight months. It is unclear if he will ever be able to walk, and if he does, he may need some form of walking aid.

Jesse was attending Footprints weekly where he works on his mobility and communication, as well as learning things other children would generally pick up naturally.

Beth said: “Footprints is a place of physical, emotional and social support for children and parents of disabled and special educational needs children.

“Through the weekly sessions, I’ve made great friends  who understand how it feels to raise a disabled child. It can be difficult to go to regular baby groups where other children are all developing neurotypically and can all do the same things, so having other parents to relate to who understand how you feel means the world to us.

“At Footprints, Jesse gets the opportunity to work on everyday skills such as rolling over, standing and learning to turn pages in a book. Through the programme and conductive education classes, we can monitor things such as how he responds to certain activities like reaching or using his hands, and put these ideas into practice at home. The weekly sessions are amazing because he learns by repetition – he knows what’s coming and he learns what to do next time.

“The sessions are very social, and since the temporary closure of the centre we have missed the simple things like sitting with the other families to have a snack, and just the support that being at the centre gives us as a family.

“It would be more than a massive disappointment for the children and their families if the centre had to close, it’s our children’s development which is at risk. We have come to rely on the centre and there aren’t many other places like it, certainly not in our area, we don’t know where else we would go to help Jesse.

“I can’t thank the Footprints team enough for the way they have supported me and Jesse – it’s life changing. I sincerely hope they are able to secure more funding to help the centre reopen in due course.”

Nathalie Bailey-Flitter, manager at Footprints CEC said: “Despite the pandemic, we have seen some incredible support from the public and our ambassadors. We’ve been humbled by those trying really hard to fundraise and putting themselves out there to help us survive. We have a 40 year history of successful conductive education and we dedicate our services to people like Jesse and Beth.

“It’s heart-breaking to think that we may have to rethink our strategy to survive, possibly making some difficult choices regarding our services. We desperately need more people to support us, particularly through annual corporate partners as that length of kind support helps us forward plan financially and helps us ensure we help as many families as we can.”

Footprints currently supports 60 families and must raise a minimum of £17,000 a month to survive.

If you would like to support the charity, you can donate to its Keep Footprints Afloat campaign: http://bit.ly/KeepFootprintsAfloat

NottinghamNEWS: Over 40% loss of income – East Midlands children’s charity sends plea to local people to not forget them during coronavirus crisis as they and others battle to stay afloat