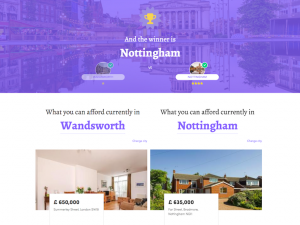 Move to Nottingham and spend £395,000 less on buying your home when compared to London prices, according to data collected by Online Mortgage Advisor. 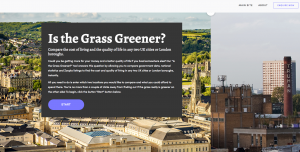 Online Mortgage Advisor has created a city comparison tool called “Is The Grass Greener?”, which uses government data, national statistics and Zoopla listings to help users find the cost and quality of living in UK cities or London boroughs.

Nottingham’s first time buyers were revealed to be £272,000 better off than those in Lambeth –  a London borough with a demographic predominantly in its 30s –  as well as making a 30p saving per pint.

According to recent data from Post Office Money, Nottingham has 89% of its property at an ‘affordable price’ compared to London’s 30%.

As well as its affordable housing, Nottingham scored a 60.59 safety rating, beating London’s 53.65. Fuel is cheaper by 1.35p a litre as well as pints being 30p cheaper on average, as revealed by the comparison tool.

Online Mortgage Advisor has also conducted a survey into the sentiment of the capital’s young residents, and found that one in three Londoners (41%) will buy their first home outside of the Big Smoke.

The cost of living was the main reason cited by 27% of respondents, who believe that it would be too expensive to purchase their first property in the city.

A further 6% of 25-34 year olds said they would put roots down elsewhere to give themselves and any future family a better quality of life. Another 8% of the 2,007 participants plan to move out of the capital for “other reasons”.

Discounting the 42% of residents who answered “I haven’t thought about this yet” the results were even stronger –  a total of 74% said they will buy their first home outside of London for one of the above reasons.

However, one in ten people surveyed said their love for the city would keep them there, and 4% cited “other reasons” as the main factor for staying in the capital.

David Bird, a director at Online Mortgage Advisor, who commissioned the survey, said: “The stats from this survey evidence the sentiment that we’ve recognised in our own customers over the past couple of years. The number of first-time buyers coming to us with enquiries about mortgages on properties outside the capital is on the rise, and we expect to see this continue as more and more people consider themselves to be priced out of London and start considering regional cities such as Nottingham.

“In light of these results, we’ve created a tool called “Is The Grass Greener?”, which compares every single UK city as well as London boroughs, to help first-time buyers discover where they can get the most for their money and a quality of life that suits them. We’ve analysed both government data and national statistics on a number of factors including house price, crime rate, schooling standards and even the price of a pint!”

“While it’s affordable for first time buyers, the Nottingham property market remains competitive – especially in the city centre – and we therefore see the majority of first time buyers looking to purchase properties in the surrounding countryside.

“Areas such as Radcliffe-on-Trent and Bingham are growing in popularity – with first time buyers wanting to be as close to West Bridgford as possible – but this also means that these areas are growing in price, too. Carlton and Sneinton are also on the more affordable end of the spectrum.

“First time buyers can get even more for their money by buying on the outskirts of Nottingham – a property of the same specifications and built by the same developer is £70,000 cheaper in East Leake than in Edwalton, for example.

“Fortunately Nottingham has fantastic public transport, which makes it easy for first time buyers to make a daily commute into the city centre for both work and play.”