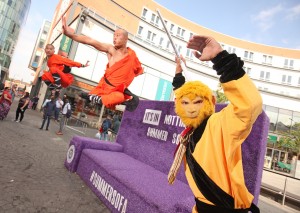 Performers from the Chinese State Circus, which is at the Royal Concert Hall in Nottingham for one night only (7 September) took time out to visit the It’s in Nottingham Summer Sofa which is currently located at Trinity Square in Nottingham city centre.

The Shaolin Warriors, the Monkey King, Diablo Acrobats and the Hat Jugglers, who have recently flown in from Dailin, China to start their UK tour attracted quite a crowd as they joined Jeff Allen, chairman of the Nottingham Business Improvement District (BID), the organisation behind the Summer Sofa, to give people a sneak preview of what they can expect when they go to the circus.

“I was very keen to start off the UK tour in Nottingham as it’s a great city, the Royal Concert Hall is a really good venue with excellent acoustics and the people are fantastic too.” said Binky Beaumont from Gandey Worldclass Productions, the organisers and programmers of the theatre tour. 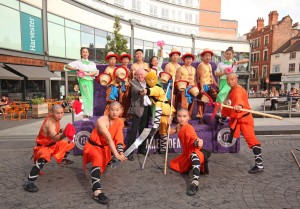 “We are delighted that the Chinese State Circus decided to start its UK wide tour in Nottingham and that some of their performers could take time out to visit our Summer Sofa,” said Jeff Allen, chairman of the Nottingham BID.  “The Summer Sofa has captured the imagination of so many people particularly our members – retailers, licensed premises and businesses in the office sector in the city centre – who love it.”

The Summer Sofa attracts lots of interest wherever it is.  By being in a different part of the city centre each week, it helps to draw attention to the variety of businesses Nottingham has and just how great a place the city is for shopping, eating and socialising.

Wherever the Summer Sofa is, people can relax on it and take part in a weekly selfie competition to be in with a chance to win a £50 shopping voucher along with offers and give-aways associated with the location.  These are announced at 10am on various days throughout the week via It’s in Nottingham’s social media channels. Clues of the daily giveaways are also available at –http://www.itsinnottingham.com/independents

Next week the Summer Sofa can be found on Weekday Cross.