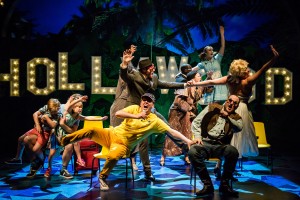 ARE DELIGHTED TO ANNOUNCE

The producers of the smash-hit ‘NATIVITY! THE MUSICAL’, are thrilled to announce the return of Simon Lipkin as the hilarious ‘Mr Poppy’ after delighting critics and audiences in the show last year. Joining Simon will be Charlie Brooks in the role of ‘Hollywood Producer’ when the show visits the Theatre Royal Nottingham from Wednesday 21 to Sunday 25 November 2018.  More details on the whole tour are here www.nativitythemusical.com.

Simon Lipkin played ‘Nicky’ and ‘Trekkie Monster’ in the original London cast of “Avenue Q” at the Noël Coward Theatre. His other West End credits include “Guys and Dolls” at the Phoenix Theatre, ‘Lonny’ in the original London cast of “Rock of Ages” and ‘Barlow’ in “I Can’t Sing” at the London Palladium. Simon will also star in Nativity Rocks’ the fourth film in the Nativity series which is released in November.

Charlie Brooks is best known for playing ‘Janine Butcher’ in BBC one’s ‘EastEnders’. She won the 2011 Christmas special of BBC one’s ‘Strictly Come Dancing’ and the twelfth series of ITV’s ‘I’m A Celebrity…Get Me Out Of Here’. Her previous theatre credits include ‘A Streetcar Named Desire’ at the Leicester Curve Theatre, ‘Beautiful Thing’ at the Arts Theatre and on UK tour and most recently starred in the World Premier of ‘Monogamy’ at London’s Park Theatre.

Scott Garnham’s previous theatre credits include the UK Tour of ‘Billy Elliot The Musical’ and the West End productions of ‘Les Misérables’ at the Queen’s Theatre and ‘I Can’t Sing’ at the London Palladium.

Ashleigh Gray is most known for playing the leading role, ‘Elphaba’ in “Wicked” in the West End and on UK Tour. Her other theatre credits include “Vanities” and “Cool Rider”.

Written and Directed by Debbie Isitt with music and lyrics by Nicky Ager and Debbie Isitt, NATIVITY! THE MUSICAL is choreographed by Andrew Wright, designed by David Woodhead, with lighting design by Tim Mitchell, sound design by Tom Marshall and musical supervision and orchestrations by George Dyer.

For further press information on NATIVITY! THE MUSICAL please contact

Images of children from the Nottingham area who will star as students of Oakwood School are available to download here:

Images of children from the Nottingham area who will star as students of Oakwood School are available to download here:

On sale at the Theatre Royal and Royal Concert Hall Nottingham