ALONG WITH RELEASE OF NEW ALBUM I AM EASY TO FIND 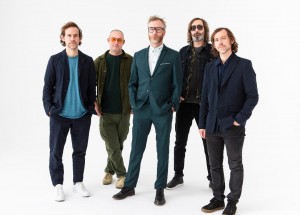 With their eighth studio album I Am Easy To Find out next Friday, The National has announced their final UK live dates for 2019.

The band will be arriving at Motorpoint Arena Nottingham on Tuesday 10 December, with tickets going on-sale this May.

Their new album titled I Am Easy To Find will be released on Friday 17 May, and is the band’s eighth studio album and the follow-up to Grammy-award winning release Sleep Well Beast. A companion short film with the same name will also be released, directed by Academy Award-nominated director Mike Mills and starring actress Alicia Vikander.

The National have established themselves as mainstays of arenas and festivals with sold-out performances and headlining slots around the world. Their most recent album Sleep Well Beast scored #1s in the UK, Ireland, Portugal and Canada. In addition, they achieved their highest chart position ever in a total of eleven countries including #2 on the US Billboard Top 200.

Both individually and collectively The National’s members have been involved in countless artistic, charitable and socio-political pursuits. The group released A Lot of Sorrow documenting their collaboration with installation artist Ragnar Kjartansson, that took place at MOMA’s PS1 and saw the band play their song ‘Sorrow’ for six hours in front of a live audience.

They are behind the Red Hot benefit albums Dark Was The Night and Day Of The Dead, and the compilation boxed set titled 7-Inches for Planned Parenthood. Band members have received a Golden Globe Nomination for work on the score of the 2015 film Revenant, founded or play a major part in MusicNow, Eaux Claires and Haven Festival and Boston Calling, and participated heavily in both Barack Obama Presidential Campaigns, and much more.

The year 2013 also saw the theatrical release of their documentary, Mistaken For Strangers set to the backdrop of the band’s 2010 release High Violet. The documentary was chosen to premiere on the opening night of the 2013 Tribeca Film Festival followed by a theatrical release in the US and worldwide distribution. Over their 16-year career the band has sold more than 1.7 million albums in the U.S. alone.

Tickets go on sale at 10am on Friday 17 May, with prices starting from £44.20. All prices listed include admin and facility fee, and a charity donation.

Tickets can be purchased online at https://www.motorpointarenanottingham.com/Online/the-national or via 0843 373 3000 or in person at the Motorpoint Arena Box Office, Bolero Square, The Lace Market, Nottingham, NG1 1LA.

A venue pre-sale will take place from 10am on Wednesday 15 May. Customers wishing to obtain priority tickets will need to sign up to the Motorpoint Arena Nottingham Mailing List by 4pm on Tuesday 14 May athttps://www.motorpointarenanottingham.com/online/createAccount.asp. The pre-sale email will be sent to new Mailing List subscribers after 5pm on Tuesday 14 May. Current Mailing List subscribers will have received the pre-sale email (10.05.19) and are asked to check their junk/spam folders if they cannot find the email.