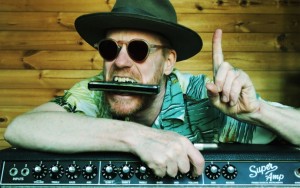 Today, Son of Dave unholsters his latest track “Pow Pow”, the third tune to come right at you from forthcoming album: ‘Music For Cop Shows’ (out October 27th).

Premiering on the mighty Gigslutz site right now, you can check out the track here http://www.gigslutz.co.uk/premier-son-dave-shares-new-track-pow-pow-ahead-lp-release/ or listen to it on Son of Dave’s Soundcloud here: -https://soundcloud.com/kartel/son-of-dave-pow-pow/s-fUPWh

Having had a few tunes put into Netflix crime dramas and the like over the years, Son of Dave certainly seems to be saying something about it here….

“I saw the TV cops shoot a good man down
They gonna knock him down,  we gonna bring him around
We gonna roll that rock, gonna make that sound”

“Pow Pow” is not your typical gritty Son of Dave blues. In fact, it sounds as though he smoked a Smurf before this one. It’s a whistler; a disturbingly poppy, Rock’n’Roll ditty that most definitely would find solace as a theme song to a cop show. Or a viagra chewing-gum commercial perhaps. The single hits the digital shelves on 6th October 2017.

Son of Dave’s songs find a place all to themselves away from the predictable. Too catchy for the alt-blues scene, but too bluesy and idiosyncratic to play alongside the latest flavours of the month. Poor old genius Son of Dave.
Son of Dave speaking about “Pow Pow” says:

“I was in a weird state for that one. Feeling nostalgic, but cranked up on some organic speed or something. Perky little melodies floating around my brain and happy memories of 1970’s TV shows when we knew who the good guys were. Gunfights and street battles never seemed to hurt anybody.

The tune went in an unpredictable direction however, and it started sounding like Curtis Mayfield singing with The Monkeys or something.  I don’t argue with the muse though. I tested it out on the washer-women, and they’re all whistling it now. It’s out of control.“

Proudly written in S.o.D’s own shed, the song was consequently recorded in London at Space Ecko East Studios with long-time co-producer Alex McGowan, who also takes the helm on upcoming album: ‘Music For Cop Shows’.

Set to be his 8th studio album, Son Of Dave will also be supporting the release with a full UK tour (dates listed below), promptly followed by other European and North American touring.

Several of Son of Dave’s tunes have already been placed in modern crime shows such as Preacher, Breaking Bad, and Bloodline, which appears to have been an inspiration for the album title. There’s no shortage of cryptic humour as usual…

Son of Dave is fifty years old, and has lived for twenty-one years in the UK, hailing originally from Winnipeg Canada where he was steeped at a young age in the blues-bar tradition. His resumé is long, having had many other successes along the way. He plans to perform until his 80s at least, pointing out that there is no pension plan for Bluesmen, and that the whole live-fast-die-young game is for kids who can’t handle their booze (or for their managers simply after publicity).

For more information and all press requests please c