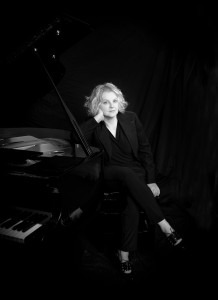 The album features the talents of Wendy Kirkland, well known in the Midlands, North and beyond as a brilliant talent on piano and additionally an excellent singer, composer and arranger.

The idea of a show featuring the work of pianist singers such as Nina Simone, Eliane Elias, Diana Krall, Blossom Dearie came from the meeting of minds of the band members; but who could produce such a performance?

There are few pianists in jazz today that can step up to the mark of singing whilst playing and rather than simply accompanying themselves, can exhibit superb technical and harmonic ability at the piano. Wendy Kirkland is that pianist singer.

Joined by the superb guitar talents of Pat Sprakes who was asked by Darius Brubeck to join his band on tour in Nottingham; Paul Jefferies who is a founder member of Gypsy Fire and Ben Holder Quartet; Stevie Smith who is a consummate professional drummer who has drummed with Blur on their iconic 90s tours.

The album was recorded over 2 days, the 13th and 14th of February, 2017 at Steinwayrecording.co.uk in Fulbeck, Notts which is owned by Spencer Cozens, keyboard player, arranger and MC for Joan Armatrading and John Martyn. Situated in an idyllic village, the studio boasts a fabulous Steinway piano which is kept at peak temperature and humidity by natural air circulation rather than air conditioning.

“This first recording could just mark the beginning of much deserved recognition.” – Alan Barnes

“Wendy is proof that great musicians are alive and kicking all around the UK and that they don’t have to be products of our music colleges to create high quality, entertaining music.” – Jim Mullen

The album is out on Blue Quaver Records 24th March and is for sale on Bandcamp and CDB aby for download https://wendykirkland.bandcamp.com/album/piano-divas https://www.cdbaby.com/cd/wendykirklandquartet CDs are available from www.pianodivas.com