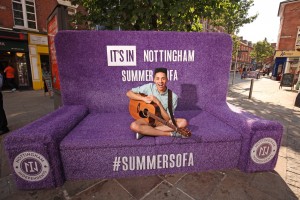 This week the It’s in Nottingham Summer Sofa, organised by the Nottingham Business Improvement District (BID), can be found on Carlton Square in Hockley and, ahead of his UK tour, local singer and songwriter Rob Green took time out of his busy schedule to go along to the sofa to entertain shoppers with a pop up gig.

The Nottingham born artist recently debuted in the Top 40 of iTunes Album Chart with his latest recording, Rob Green EP, and he has gained international critical acclaim for the innovative, continuous shot music video written for Blue, the EP’s debut single.

With its great selection of chilled out cafes, cool bars, pubs, restaurants and vintage shops, Hockley is the perfect place to take a break on the gigantic purple sofa to soak up the atmosphere of the area.

The Summer Sofa is designed to draw attention to the different areas of the city that combine to make Nottingham such a great place to shop, eat and go out in and wherever the Summer Sofa is, people can sit on it and take part in the weekly sofa selfie competition to win a £50 shopping voucher along with offers and give-aways associated with the location.  These are announced at 10am on various days throughout the week via It’s in Nottingham’s social media channels. Clues of the daily giveaways are also be available athttp://www.itsinnottingham.com/independents

Rob starts his tour on 28 August at the Victorious Festival in Southsea and is looking forward to playing to local crowds again in Hockley on Friday 2 September when he performs at Lee Rosy’s Team Rooms.

Rob Green said: “I really enjoyed doing the pop up gig on the Summer Sofa.  It’s only in Nottingham that you can do something like this and with Hockley being such a creative space it was the perfect location.”

“The sofa is certainly attracting lots of attention and gives people a reason to stay a little longer in the area, which has to be a good thing,” said Polly Reade, operations manager at nearby Boilermaker and Junkyard in Bridlesmith Walk.  “I think it’s a great idea.” 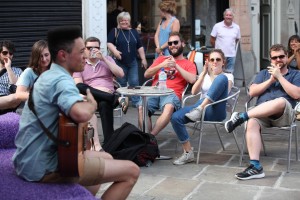 The views are echoed by Lee Holmes of Lee Holmes Salon which is next to where the Summer Sofa is currently located:  “It’s great to see lots of families and children sitting on it and getting involved by taking part in social media competitions.”