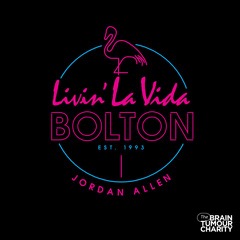 Returning with their most striking and affecting single to date – JORDAN ALLEN’s ‘110 Ways to Make Things Better’ is out now.

Taken from the Livin’ La Vida Bolton EP, ‘110 Ways…’ along with two brand new tracks are available to listen to now, with proceeds from all sales of the EP going to the BRAIN TUMOUR CHARITY.

As they continue to tour their triumphant new release, the four piece have announced a slew of new dates and festivals for the Spring, with appearances at Dot To Dot Festival and Live At Leeds, plus appearances in London, Sheffield, Bedford, Newcastle and more (full details below).

Watch the video for ‘110 Ways To Make Things Better’ here: https://www.youtube.com/watch?v=4dSXC0wD_EQ&feature=youtu.be Fresh, endearing, bittersweet, raw, and optimistic – ’110 Ways…’ is all of these things and so much more. Written and recorded during the terminal illness of Jordan’s father Kevin in the closing months of 2016, the song is a tribute in the truest form to a man who was Jordan’s greatest supporter both in his life and music.The original ‘110 Ways…’  demo was played to his father while in hospital during his final days. It was, of course, given a big thumbs up. Eventually completed following his father’s passing, Jordan looked to finesse the track with a hopeful outlook as to how he and his family can overcome such a heartbreaking loss.In addition, the new track comes paired with a stunning video that seamlessly weaves intimate family home videos and recent footage of Jordan Allen performing live with his father in attendance and revelling in every second.

Directed by Kill Farrell, the video perfectly echoes the sentiments of the song with Jordan striving to overcome setbacks as he stretches for the good times that inevitably lie ahead. ‘110 Ways…’ was produced and mixed by David Radhad-Jones at Red City Studios in Manchester and will feature on an EP of brand new material from the band – the playfully titled Livin’ La Vida Bolton - set for digital release on Friday 10th February 2017. The EP also features new tracks ‘Imperial Leather Drama’ and ‘Rosie’. All proceeds earned will go to the BRAIN TUMOUR CHARITY.

“This one is dedicated to my dad. He came to every show and was really proud of everything that we are doing as a band. This song is really important to us. Despite everything else that’s going on in the world right now, I want this to be a soundtrack to a bright 2017… This one’s for him.”Following their recent run of dates with Sheffield rabble-rousers The Sherlocks, Jordan Allen are now lining up a series of dates throughout the Spring they continue to tour ‘Livin’ La Vida Bolton’. Full dates and details listed as follows:

With a string of head-turning singles and sell-out shows last year, JORDAN ALLEN have laid the foundations for a monumental 2017. Debut performances at the legendary Leeds and Reading festivals, not to mention heaps of airplay with singles ‘Helter Skelter’, ‘Too Much Too Soon’ and ‘Dancing In The Dark’ have seen the Bolton four piece receive praise from the likes of BBC Radio 6 Music, Clash and Radio X.

Outlining their ambitions and what to expect in the new year, front man Jordan states:“2017 for us is an incredibly exciting prospect, we have new tracks to release that I know are the finest  we’ve written yet, which are now all ready to go. I’m confident that 2017 will be our year… we want to show Manchester that we are the next big thing. We want to be up there with Courteeners and Blossoms by the end of 2017 and we’ll stop at nothing to achieve that… Livin’ La Vida Bolton.”