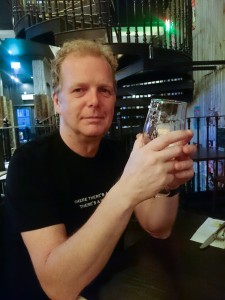 It’s a busy week for Dr John Powell with the publication of his latest book Why We Love Music.
The Nottingham based, classically trained composer and physics professor has just returned from lecturing in Germany when I meet up with him “I’m doing BBC TV Breakfast, Radio Nottingham and talking to Stuart Mackonie this week” he tells the Post as we order drinks in the city’s new Belgo restaurant. Johns choice, he admits his recreational time is spent in Nottingham’s pubs and restaurants, and he’s not tried this one yet.
At home as he is giving lectures at international laser conferences, John has also played guitar in pubs in return for free beer, and so talk turns to a section in his new book as to whether music can change the taste of wine. I’m willing to experiment as he explains an investigation into this saw several groups of people, who thought they were at a regular wine tasting, played one of four different types of background music while they were given a free glass of wine. The mood of the music was deliberately chosen by psychologists running the test to be either powerful and heavy, subtle and refined, zingy and refreshing, or mellow and soft. The drinkers were asked to rate them on these categories.  The results showed that people tend to match the flavour with the mood of the music, when in fact the wine was the same in every case.
It has been 6 years since the publication of John’s first book How Music Works, in 2010, which came about he tells me after deciding to go back to University to finish his musical education by doing a masters degree in composition.
“Having trained as a scientist, I wasn’t looking forward to writing another thesis so decided the easiest way of getting it out of the way was to write something about the science behind music.
“I started reading books on musical acoustics. It was quite a revelation. They were fascinating and well written but gave me a headache. I started making notes to make it easier to understand – and got the idea of translating the whole subject into chatty, non technical English.”It is Johns engaging conversational style of writing and humorous anecdotes which made the first book, now translated into 10 different languages, a success.

“I’m a great admirer of Bill Bryson’s style of presenting lots of information but keeping the tone light and cheerful.

“I liked the reaction it had.  Music can transform your mood. The books are full of little-known facts and the fascinating science behind what we listen to. Even if you can’t read a note they can increase your listening pleasure.

“I love to see people enjoy music, but what they don’t understand is why they suddenly start to hate that pop song they loved last week, or why some tracks clear the floor at weddings while some have that ‘put the pint down and boogie’ impact

“The latest book is a collection of all the most interesting facts about music psychology that I could find. It covers some big questions like what is music for and why does it exist at all, but also covers some of the more detailed stuff such as the tricks movie composers play on us to manipulate our emotions. Or the fact that simply carrying a guitar case makes young men twice as attractive to women”

It wasn’t always plain sailing. The 61-year-old author, who divides his working time between scientific research, running a laser firm in Nottingham and composing and writing about music, has a PhD in high-power lasers from Imperial College, London, and a Masters in Music from Sheffield University but originally struggled to get the first book noticed.

“The original idea was to give chapters to a music magazine, then when some interest had been generated, bind them together into a self-published book.”

He recalls how every Monday evening for a couple of years he would retire to his desk and write about scales, chords and vibrating strings before ringing for a takeaway and watching an episode of Morse from a box set.

“There’s nothing more relaxing than watching Oxford academics being either murdered or arrested.”

But chapters were returned unwanted and unloved until Penguin agreed that it was a book people might enjoy. Then he wrote and ate takeaway every night until it was finished.

John, who has taught physics at universities of Nottingham and Lulea in Sweden admits that music psychology is a huge field.

“What I’ve tried to do is explain the hows and whys of music, make the facts accessible rather than delivered in a dry academic style which quite a few books and papers are written in.”

The latest book includes sections on background music in shops, how music can cure insomnia and even reduce pain at the dentist.

“Did I mention that Barry Manilow songs can also be used for crowd control?” adds John.

This interview was first published in The Nottingham Post