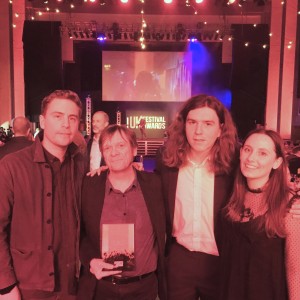 Dot to Dot, the multi-venue all day music festival staged in three legs across Bristol, Manchester and Nottingham over one weekend, has been crowned as the top festival in the UK to discover emerging talent.

With this year being the most fiercely competitive since the UK Festival Awards began 14 years ago, DHP Family was delighted to pick up the award ‘Best Festival for Emerging Talent’ for Dot To Dot.

Since its inception 13 years ago as one of the very first metropolitan festivals, Dot to Dot has consistently supported new music and provided a springboard to many artists, who have later gone on to great success, by giving them early, big stage slots.

Global superstars Ed Sheeran, Ellie Goulding, Foals and The 1975, as well as Jake Bugg, London Grammar, Dua Lipa and Rag n’ Bone Man have all featured in some of the festival’s memorable line ups.

Anton Lockwood, DHP Family’s Director of Promotions, said: “We’re especially pleased to have been chosen as the Best Festival for Emerging Talent. Over the 13 years of its existence, growing new artists has always been at the absolute core of what Dot to Dot is about, and we’ve seen many artists go on to huge success after gracing our stages. We will renew our search for the finest new talent with even more vigour now our success in doing so has been recognised!”
The 2017 edition of Dot to Dot was its biggest to date, with consecutive days in Manchester, Bristol and Nottingham across the May bank holiday weekend. Sundara Karma headlined after three years of coming through the ranks; BBC Sound of 2017 shortlisted vocalist Tom Grennan left the Rock City stage beaming and shortly after announced a huge 2018 tour; and The Big Moon received a well-deserved Mercury nomination.

The UK Festival Awards has been recognising and rewarding the efforts of the nation’s festival industry since 2004. The Award winners are determined through a combination of online fan votes and industry experts.

The winners were announced on November 30 at the Troxy, London.

Early bird tickets for Dot to Dot 2018 are now on sale.

For more details on the awards visit www.festivalawards.com.

For details on Dot to Dot Festival visit www.dottodotfestival.co.uk.